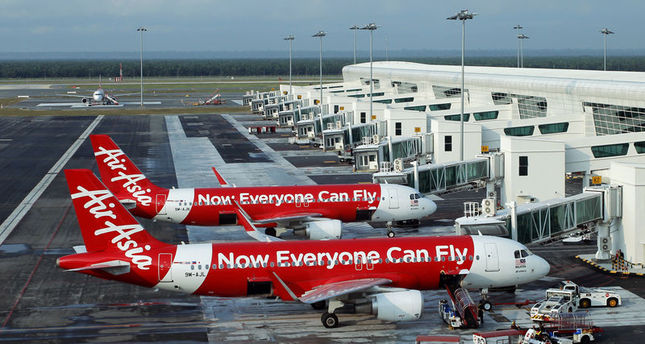 A Malaysia-based AirAsia plane flying from Indonesia to Singapore with 162 people on board was reported missing after losing contact with ground control while flying over the Java Sea early on Sunday morning.

This is the third aircraft belonging to airlines from Malaysia that has gone missing or was shot down in 2014. Indonesian Vice President Jusuf Kalla said that it is "most likely an accident," while offering his condolences to relatives of the passengers, as reported by Anadolu Agency.

A massive sea search operation was launched on early Sunday, but no report has been released yet over what caused the aircraft to go missing. The search halted at nightfall on Sunday over stormy Indonesian waters, Indonesia's transport ministry said.

"We ended at 5:30 pm local time because it was getting dark. The weather was also not too good, as it was getting really cloudy," Transport Ministry official Hadi Mustofa told Agence France-Presse. Singapore's Civil Aviation Authority deployed a C-130 turboprop aircraft to help in the search operation in addition to three ships deployed by Malaysia's Transport Ministry.

The search operation is expected to begin at 7:00 a.m. on Monday "or even earlier than that if the weather is good" enough to continue the operation. The air transportation director at the Indonesian Transport Ministry said that the aircraft had been flying at 9,750 meters and had asked to fly at 11,580 meters to avoid clouds, as reported by Reuters.

A list of the nationalities of passengers and crew was released: 149 Indonesians, three Koreans and two people from Singapore and Malaysia were on board, according to Indonesian media. The U.K. Foreign Ministry confirmed one Briton was reportedly on board, as reported by BBC news.

2014 was a tragic year for Malaysia Airlines, losing two flights – MH370 and the subsequent downing of MH17 over Ukraine. Malaysia Airlines flight 17 was shot down in a rebel-held area of eastern Ukraine on June 17. There were reportedly 298 passengers and crew on board; there were no survivors.

Flight 17 was reportedly carrying at least 193 Dutch nationals, 27 Australians, 44 Malaysians, 12 Indonesians and nine Britons. The shooting down of the civilian jetliner over war-torn eastern Ukraine left many questions unanswered, paving the way to escalating global outrage, as world leaders called for a full-scale investigation to determine whether the missile was launched by pro-Russia separatist rebels or not.

Another Malaysia Airlines flight, MH370, disappeared on March 8 on a flight from Kuala Lumpur to Beijing with 239 passengers and crew. There have been many conspiracy theories launched about the missing flight, as the wreckage has still not been located. Hijacked by Afghans and captured by aliens are the best conspiracy theories so far.