Number of bodies recovered from AirAsia wreckage rises to 30 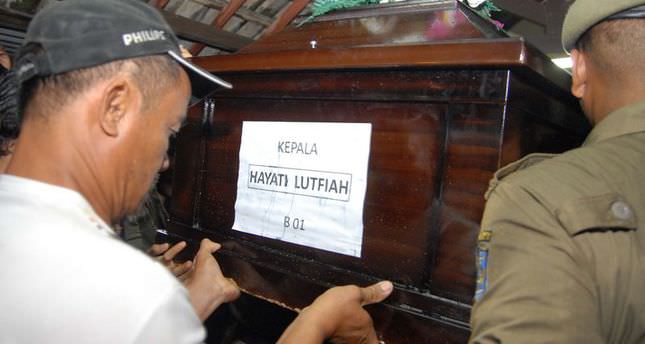 by AA Jan 02, 2015 12:00 am
The number of bodies recovered from the AirAsia flight that crashed into the Java Sea with 162 people on board rose to 30 with the discovery of 21 more victims Friday, local media reported.

Bambang Soelistyo, head of Indonesia's National Search and Rescue Agency, said the corpses had been recovered from the sea off the coast of Pangakalan Bun, the nearest town to the crash site.

He said: "In total we have recovered 30 bodies. Ten bodies have been flown to Surabaya [East Java], four are in Pangakalan Bun; seven are on [naval vessel] KRI Bung Tomo, one on [Malaysian naval vessel] KD Pahang and eight bodies are in Surabaya."

Quoted in the Jakarta Post, he added: "We have also recovered debris from the plane but I won't go into detail."

He told a press conference in central Jakarta on the sixth day of the search that the recovery team was facing strong winds and high waves.

They were among seven bodies retrieved from the Java Sea and taken to an Indonesian vessel Friday, he said.

A U.S. warship assisting in operations reportedly discovered a number of the bodies in Karimata Strait, between the Indonesian islands of Sumatra and Borneo.

Soelistyo said the search would be stepped up as long as the weather permitted.

"We will focus on underwater detection," he said.

Vessels from Indonesia, Malaysia, Singapore and the U.S. have been trying to pinpoint the plane's fuselage and the flight data and cockpit voice recorders, which will contain the information vital to piecing together the puzzle of what happened in the lead up to the aircraft's disappearance from radar screens on Sunday.

Admiral Widodo, the commander of Indonesia's Western Fleet, said challenging weather conditions are not expected to pose an obstacle in transporting the dead by helicopter.

Earlier Friday, the Indonesian Navy vessel Banda Aceh had sailed to the site of the wreckage carrying 57 elite divers.

Heavy rains and strong winds had previously prevented divers and helicopters from operating.

Many of the victims are believed to be inside the fuselage, strapped to their seats because of the turbulent weather when the flight got into trouble. The divers are tasked with swimming to depths of nearly 150 feet (45 meters) for 15 to 25 minutes.

While an initial team is assigned with evaluating conditions in the waters and setting up a rope line, the next team must work to recover bodies by following the line.

Debris from the aircraft, including an emergency door, was initially found by a Hercules C-130 search plane Tuesday morning in Karimata Strait.

According to the rescue agency, a total of 670 personnel, 27 ships and 57 aircraft were deployed to the area, some provided by other countries including Singapore, Malaysia and Australia.

"The ship is equipped with detectors to detect the signals of black boxes," he said at a press conference broadcast on local television. He added that the vessel's "sonar scan multi-print" system had the capacity to produce three-dimensional images of underwater objects.

The last contact with the flight en route to Singapore was at 06.12 Sunday when the pilot requested permission to veer left and climb to 38,000 feet (11,600 meters) to avoid heavy storm clouds.

The pilot was granted permission to change course but not to climb immediately due to another flight on the same path. No distress signal was received before the plane disappeared from radar.

The majority of those aboard were Indonesians although the co-pilot was French and the passengers included three South Koreans, a Malaysian and a British national reportedly travelling with his Singaporean daughter.

The loss of AirAsia is the third major air disaster to hit Southeast Asia this year. In March, Malaysia Airlines Flight MH370 went missing en route to Beijing with 239 aboard and four months later Flight MH17 crashed in Ukraine's Donetsk region near the border with Russia, killing all 298 aboard.

AirAsia had a positive safety record and had not reported any previous disasters.