Uighur banned from wearing burqas in public in China 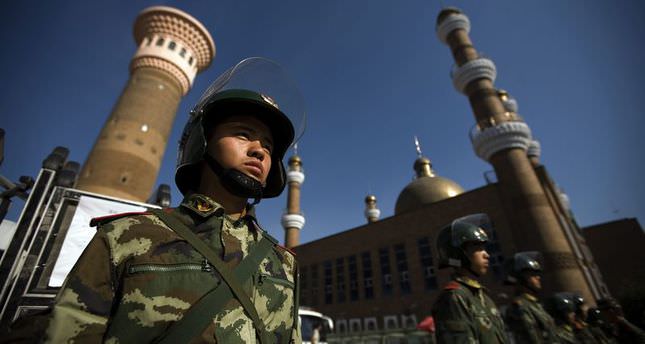 by AA Jan 12, 2015 12:00 am
Muslims in China's northwestern Xinjiang Uighur Autonomous Region have been banned from wearing burqas in public places - the latest in a raft of restrictions seen to clamp down on the religious beliefs of the region's Uighur.

Xinjiang's regional capital of Urumqi decided to ban the burqa last month and the legislature of the region signed off on the ruling Saturday.

Xinhua highlighted that the garment has also been banned in France and Belgium and stated that it is "not a national dress of Muslims."

In July 2014, the government issued warnings to employees and students not to fast during the holy month of Ramadan.

It also restricted men from having long beards, clamped down on religious education activities, and acted to control the entrances and exits to mosques.

Wide security measures were introduced in the troubled Xinjiang Uighur Autonomous Region in 2014 to combat attacks and clashes with security forces by separatists who are fighting to create an independent East Turkmenistan nation.

Uighur, a Turkic group that makes up around 45 percent of the population of Xinjiang, has accused China of carrying out repressive policies that restrain their religious, commercial and cultural activities.