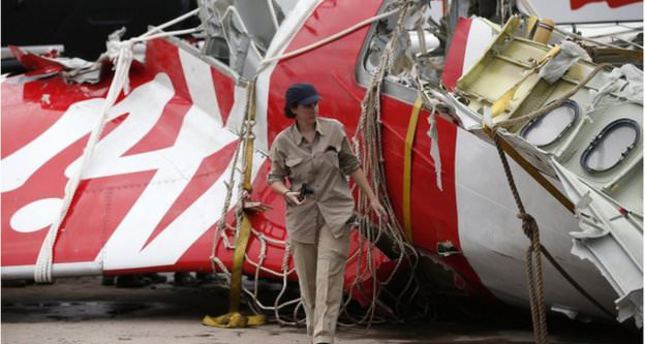 by Jan 13, 2015 12:00 am
Divers retrieved one black box Monday and located the other from the AirAsia plane that crashed more than two weeks ago, a key development that will help investigators unravel what caused the aircraft to plummet into the Java Sea. The cockpit voice recorder was found just hours after officials announced that the flight data recorder had been pulled from beneath a piece of the aircraft's wing and brought to the sea's surface, said Suryadi Bambang Supriyadi, operation coordinator for Indonesia's national search and rescue agency. However, he said that the voice recorder remained lodged beneath heavy wreckage, and that divers were struggling to free it at a depth of 32 meters (105 feet).

Searchers began zeroing in on the sites a day earlier after three Indonesian ships picked up intense pings from the area, but they were unable to see the devices due to strong currents and poor visibility. The two instruments, which emit signals from their beacons, are vital to understanding what brought Flight 8501 down on Dec. 28, killing all 162 people on board. They provide essential information, including the plane's vertical and horizontal speeds along with engine temperature and final conversations between the captain and co-pilot.

The flight data recorder was lodged under debris from the wing at a depth of about 30 meters (100 feet), Supriyadi said. Once it was found, divers concentrated on locating the source of the other ping heard only a few meters (yards) away. Once the second device is recovered, both boxes will be taken to Jakarta, Indonesia's capital, for analysis. It could take up to two weeks to download their information, said Nurcahyo Utomo, an investigator at the National Committee for Safety Transportation. The slow-moving hunt, which has often gone days with little progress, got a boost over the weekend when the Airbus A320's tail was lifted from the seabed. It was the first major wreckage excavated from the crash site, but the black boxes were not inside as hoped.

On Sunday, the ships detected two strong signals near each other, and officials became focused on finding their source. Search efforts have been consistently hampered by big waves and powerful currents created by the region's rainy season. Silt and sand, along with river runoff, have created blinding conditions for divers. Henry Bambang Soelistyo, head of the national search and rescue agency, said Sunday that divers had located the wing and debris from the engine.

The last contact the pilots had with air traffic control, about halfway into their two-hour journey from Indonesia's second-largest city, Surabaya, to Singapore, indicated they were entering stormy weather. They asked to climb from 32,000 feet (9,753 meters) to 38,000 feet (11,582 meters) to avoid threatening clouds, but were denied permission because of heavy air traffic. Four minutes later, the plane dropped off the radar. No distress signal was sent.