A victory for democracy in Sri Lanka after authoritarian past 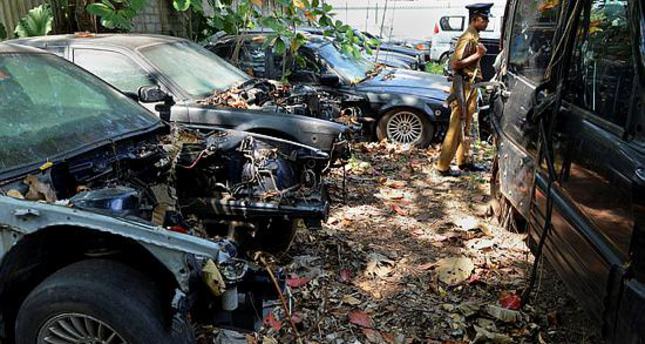 by Joseph Hammond Jan 24, 2015 12:00 am
New Sri Lankan President Maithripala Sirisena's surprising election victory over long-time strongman Mahinda Rajapaksa marked a new era of democracy for the nation of 22 million. Mahinda Rajapaksa who led the government to victory in the Sri Lankan Civil War in 2009 had expected continued support from the island's Buddhist Sinhalese majority. Yet, in recent years the people of Sri Lanka have come to see Rajapaksa as a corrupt tyrant. His government spent $277 million on an airport in his native Hambantota region and other large scale vanity projects.

Sirisena like Rajapksa is a member of the Sinhalese community, the largest ethnic group on the island. He is a devout Buddhist and doesn't drink alcohol. The former minister of health has pledged to tackle corruption, tax the "super rich" and reign in the country's debt of $55 billion. Since coming to power Sirisena has reach out to IMF to help with the country's debt burden. Key to attracting new investment will be the development of an inclusive democratic system which addresses the long-standing grievances of the country's Tamil, Muslim, and Christian minorities. Such a system will help insure investor confidence in Colombo.

The 63 year old Maithripala Sirisena attended university in Moscow and never learnt English. He may be the right combination of both savy insider and reformer needed to help stabilize the country after decades of civil war. Sirsena knows the corruption of the regime well. Until recently he was a member of Rajapaksa's government. By joining with long time opposition ruler and former Prime Minister Wickremesinghe he crafted a "dream ticket" that included 48 political parties and groups.

Investigations into Rajakpasa regime and its criminal activities is a key priority of the new government. Prime Minister Wickremesinghe has already declared that a $1.5 billion port project awarded to the China Communications Construction Company will be cancelled. The project had sought to create an artificial port larger than the state of Monaco. Nor is Sirisena seeking to merely create his own proto-authoritarian regime. Sirisena campaigned on the promise to repeal term limits which would have allowed Mahinda Rajapaksa to run indefinitely. He has also pledged to not seek his own re-election.

In 2009, Sri Lanka became the first country in the 21st century to win a counter insurgency campaign. The Tamil Tigers who invented both suicide vests and pioneered the use of women as suicide bombers for decades waged a brutal terror campaign. Between their founding in 1983 and 2000 the group carried out 171 suicide attacks, more than all other active terrorist groups combined. In the final government offensive of the war in 2009 as many as 40,000 Tamil citizens may have perished. Many of the Tamil majority areas of the country remain under virtual occupation with checkpoints and armed soldiers a fact of life. Prudent reforms would include easing travel restrictions in Tamil areas and ending military occupation of property owned by minority groups. The easing of sanctions against the Tamil diaspora could pave the way for needed investment in the devastated north of the country. Sirisena's government has announced plans to go even further and give Tamil majority areas autonomy within a unitary state.

Muslims in Sri Lanka constitute at least 12% of population, though Muslim groups believe they are undercounted in government census efforts. The majority of Sri Lankan Muslims speak a variant of Tamil. One colorful exception is the local Malay community the decedents of mercenaries brought to Sri Lanka by the Dutch.

Christianity also has deep roots in Sri Lank. An ancient Nestorian cross was discovered during excavations of Sigirya, a former imperial palace and the island's principal tourist attraction. Christianity gained a permanent foothold with the arrival of the Portuguese and later Dutch colonial control. Due to this history many Sri Lankan Buddhists associate Christianity with imperial rule. Ceylon as the country was then known was swapped between the colonial empires of Portugal, Holland and Britain between 1505 and the island's independence in 1948.

The Sinhalese ultra-nationalism sparked by the long war has not abated. Instead radicalized Buddhist priests have gone looking for new enemies namely the country's Muslim and Christian minorities. During the civil war, the nation's Muslim population supported government efforts against the Tamil Tigers. Yet despite this Muslims in Sri Lanka have faced increased attacks three Muslims died in violence last year and scores of mosques have been burned since 2012. Attacks on Christian Churches and faith leader have also increased. According to local NGOs between January to September 2013, 227 attacks against Muslim places of worship and other institutions were recorded and 103 similar attacks took place against Christian churches, religious gatherings and pastors. Rajapaksa was usually silent about such attacks but, the new government should show its commitment to freedom by recommitting itself to religious liberty for all.

So far Sirisena has signaled the beginning of a new era. He warmly welcomed the visit of Pope Francis to the country. His Holyness took the opportunity to visit a Buddhist temple and name a new local saint. The replacing of the ex-military governor of the Tamil majority north is also a promising move. The Sri Lanka Muslim Congress Party (SLMC) defected from the Rajapaksa ranks in December and provided key electoral support to Sirisena. The SLMC's leadership met with Sirisena on Wednesday and called for investigations into recent riots against Muslims and Christians. SLMC members believe the violence occurred due to Rajapaksa's negligence. Given the electoral support Muslims provided to Sirisena's campaign their petitions will be hard to ignore. Sirisena tapped four Muslim leaders to join him as ministers in his maiden cabinet. Three of whom had previously severed under the Rajakpasa regime.

Sirisena must tread carefully. Rajakpasa still has plenty of allies and extremist Buddhist nationalist may not go quietly. Buddhist radicals have shown in the past their ability to mobilize large street demonstrations. Evidence suggests Rajakpasa's initially plotted a coup to remain in power despite his electoral defeat but, the Sri Lankan army and police refused to join in his conspiracy. Sri Lanka is no stranger to coup attempts: the country saw two coup attempts in the 1960s. Still Sirisena's surprise victory is a key win for the spread of democracy. If it can be solidified by preserving minority rights it will be a victory not just for Sri Lanka but, for democracy in Asia.