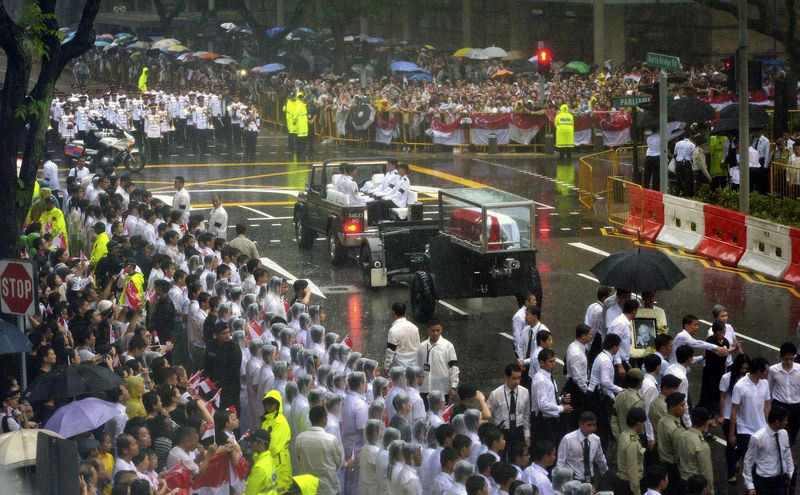 | Photo: EPA
by Associated Press Mar 29, 2015 12:00 am
Thousands of Singaporeans have lined a 15 kilometer (9 miles) route, despite heavy rains, to bid farewell to their founding leader Lee Kuan Yew on Sunday, who died on Monday aged 91.

Lee's coffin, protected from the downpour by a glass casing, lay atop a ceremonial gun carriage led solemnly past city landmarks from parliament to a cultural center where the state funeral will be held. Walking slowly in the coffin's wake as it exited parliament were Lee's son, the current prime minister Lee Hsien Loong, other family members and government officials.

"The light that has guided us all this years has been extinguished," his son, Prime Minister Lee Hsien Loong, said in a state funeral at the National University of Singapore attended by Asia-Pacific leaders.

During a week of national mourning that began on Monday after Lee's death at age 91, some 450,000 people queued for hours for a glimpse of the statesman's coffin at Parliament House. A million people visited tribute sites at community centers around the city.

The expansive show of emotion is a rare event for Singapore and its 5.5 million people. The island nation about four times the size of Washington D.C. is known around the world as a wealthy trade and finance center with a strict social order including a ban on chewing gum and caning for some crimes.

Lee was Singapore's prime minister for more than three decades, ruling with an iron grip until 1990, and is regarded by Singaporeans as the architect of their nation's prosperity and harmonious race relations.

"He did everything for us Singaporeans regardless of race, language or religion," said Jennie Yeo, a 58-year-old teacher, who arrived at 7 a.m. to stake out front row positions with two friends. "Education, housing, everything you can think of, he's taken care of for us," she said.

Abroad, India has declared a national day of mourning and in New Zealand, the government is flying flags at half-staff.

During the funeral service, civil defense sirens will blare across the island to begin a minute's silence.
Last Update: Mar 29, 2015 1:51 pm
RELATED TOPICS