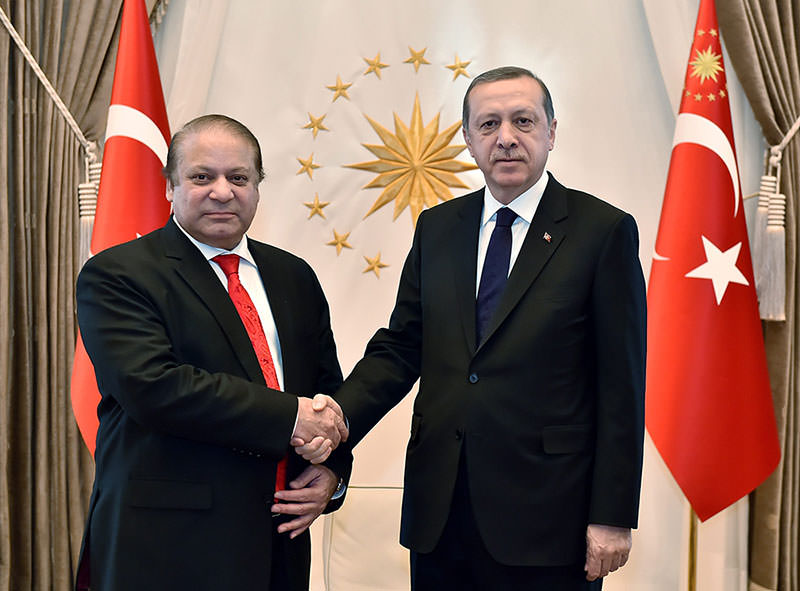 President Erdogan and Pakistani PM Nawaz Sharif before their meeting in Ankara on 3 April | EPA Photo
by German Press Agency - DPA Apr 07, 2015 12:00 am
Pakistan Prime Minister Nawaz Sharif said on Tuesday that his country and Turkey were exploring a political solution to the Yemen conflict and invited Iran to join their efforts.

"Iran should also join the discussion and evaluate whether their policy is correct," Sharif said, during a debate in Pakistan's parliament over whether the country should join the Saudi-led Sunni military offensive against Shiite Houthi rebels in Yemen.

Defense Minister Khawaja Asif said on Monday that the Saudi government had asked Islamabad to provide troops, fighter jets and warships for its campaign against the rebels who are allegedly backed by Iran.

Most Pakistani legislators expressed concerns that getting involved in Yemen would further widen a domestic sectarian divide that had claimed thousands of lives over the decades.

Sharif said he would contact Malaysian and Indonesian leaders to rally the support of the Muslim world to end the conflict peacefully. He visited Turkey this weekend.

The Iranian foreign minister is due to visit Pakistan on Wednesday, and discussions on Yemen are expected to dominate the agenda.

Pakistan's leadership has been staunchly allied with Saudi Arabia, but the country has recently been warming up its economic and political relations with Shiite Iran for its energy needs.

"It is a tough decision," said Irfan Shahzad, lead researcher at the Institute of Policy Study think tank. "Islamabad can ill afford to enrage both Saudis and Iranians."

The parliament might decide to send troops to defend Saudi Arabian territorial integrity, but would not participate directly in the war in Yemen, a minister told German Press Agency dpa ahead of the meeting.

"That is what we can do for the Saudis in a minimal possible way," said the minister, who requested anonymity, "we don't want our own country to suffer because of a conflict thousands of miles away."