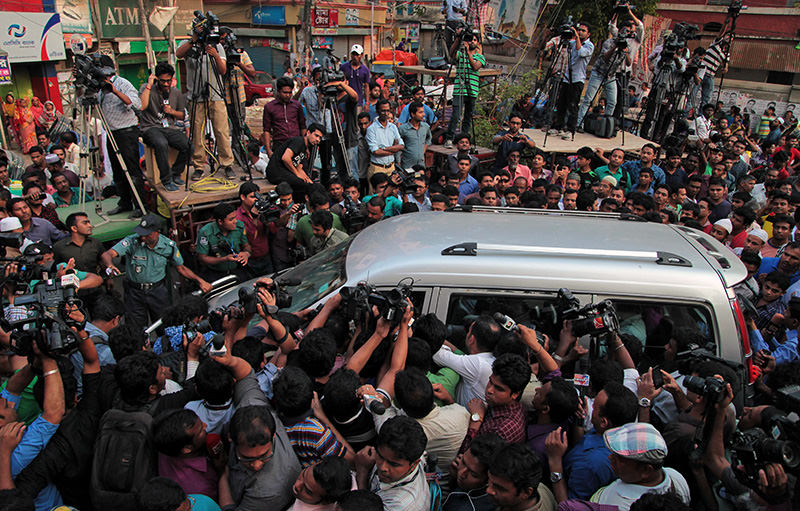 Journalists surround the car carrying family members of Mohammad Qamaruzzaman, as they leave the Central Jail after meeting Qamaruzzaman in Dhaka, Bangladesh| AP Photo
by French Press Agency - AFP Apr 11, 2015 12:00 am
Bangladesh authorities on Saturday hanged a top Islamic leader for overseeing a massacre during the nation's 1971 independence war against Pakistan.

Specially trained convicts took him to a makeshift gallows set up near his prison cell and hanged him using a rope, in line with Bangladeshi jail procedure. He was declared dead by a magistrate and a government doctor.

Kamaruzzaman, the third most senior figure in the Jamaat-e-Islami party, was convicted of abduction, torture and mass murder as one of the leaders of a pro-Pakistan militia that killed thousands of people.

An ambulance carrying Kamaruzzaman's body left the jail for his home village in northern Bangladesh more than an hour after the execution, jailor Farman Ali told reporters, adding that the vehicle was escorted by a convoy of elite security officers.

The Jamaat party condemned "the government's pre-planned murder of writer, journalist and Islamic scholar" Kamaruzzaman and called a nationwide strike for Monday in protest at the hanging.

Hundreds of secular supporters burst into cheers and made victory signs as news of the hanging was announced in central Dhaka, where they gathered to celebrate the death of a man they called a "war butcher".

Kamaruzzaman, 62, became the second Muslim politician to be hanged for atrocities during the 1971 war. Abdul Quader Molla, Jamaat's fourth-highest ranked leader, was hanged in December 2013.

Police said security was tightened outside the capital's main jail and across the country ahead of the hanging.

Bangladesh went ahead with the execution despite last-minute pleas by the United Nations, the European Union and human rights organisations to halt the hanging. The UN said the trial did not meet "fair international" standards.

Just hours before the execution, Kamaruzzaman's family visited him at the prison.

"We found him in good health and not worried about his fate at all," his eldest son Hasan Iqbal told AFP after seeing his father.

"In his last comments, he regretted he did not see the victory of Islamic movement in Bangladesh. But he was confident it would be victorious here one day," he said.

The family had dug a grave at his village in northern Sherpur district where he would be buried on Sunday, he added.

The country's Supreme Court cleared the last hurdle for execution of Kamaruzzaman on Monday after rejecting his final appeal against the original death sentence handed down by a controversial war crimes court in May 2013.

He was given several days to seek clemency from the country's President Abdul Hamid to avoid death. But his son said his father did not seek any mercy.

"My father said only Allah can give or take life, not a president," he said.

Prosecutors said Kamaruzzaman presided over the massacre of at least 120 unarmed farmers who were lined up and gunned down in the northern village of Sohagpur during the war.

The remote hamlet has since become known as the "Village of Widows".

The 1971 conflict, one of the bloodiest in world history, led to the creation of independent Bangladesh from what was then East Pakistan.

Three women who lost their husbands testified against him in one of the most emotive of all the war crimes trials.

"All 32 widows who are still alive are happy the notorious killer has been hanged. Finally we got justice," said Mohammad Jalal Uddin, a Sohagpur farmer who lost seven members of his extended family in the killing.

Jamaat, the nation's largest Islamic party, is an ally of the Zia's Bangladesh Nationalist Party (BNP).

Hundreds of Jamaat activists were killed in 2013 when the party held a series nationwide protests to halt the war crimes trials of its leaders.

At least five other Jamaat leaders, including the party's head Motiur Rahman Nizami, have been sentenced to death and their appeals are being heard in the Supreme Court.

Since the start of the year Jamaat's members have been accused of being behind a number of deadly firebomb attacks, including on buses. The violence in the past three months left at least 120 people dead.

Jamaat and the BNP have said the war crimes trials are mainly aimed at silencing Hasina's opponents rather than delivering justice.

Hasina's government says the trials - which lack any international oversight - are needed to heal the wounds of the conflict.