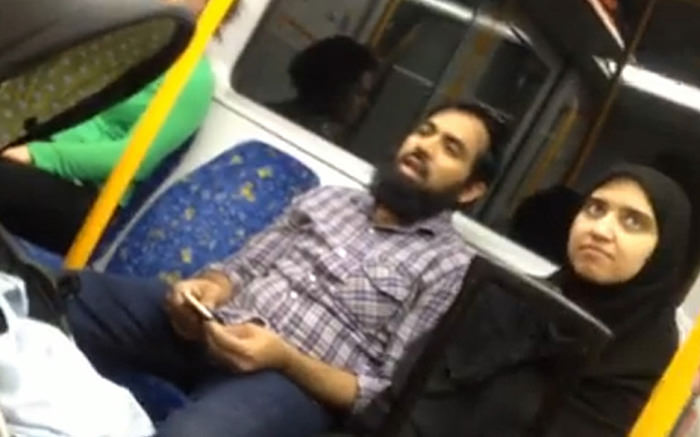 Couple seen on the video uploaded by Stace Eden (Youtube)
by Mehmet Çelik Apr 16, 2015 12:00 am
An Australian woman, named Stacey Eden, has been described as a "hero" for standing up against a passenger who was being verbally abusive towards a Muslim woman traveling in a train in Sydney on Wednesday.

Eden has claimed that an elderly woman was accusing the Muslim woman and the man sitting next to her of being supporter of the self-proclaimed Islamic State in Iraq and al-Sham (ISIS) and those who killed Christians in Kenya, because she was wearing a hijab.

Video footage uploaded to Eden's Facebook page began as the unnamed passenger asked the woman, "why do you wear it [a hijab] for a man that marries a six year-old girl?, but the woman did not reply.


The women with racist comments did not stop and continued saying, "Your kids behead people in Syria, read the newspapers, 148 people, Christians murdered in Kenya. They're killing each other in Syria."

Ms Eden intervened angrily telling the woman with racist, anti-Muslim comments to stop being disrespectful towards someone that has nothing to do with the events: "If you've got nothing nice to say, don't say anything."

The video uploaded by Stacey Eden has attracted attention on social media and has received a lot of praise.

Muslims and other immigrants living in western countries have recently been facing an increase in Islamophobic and xenophobic tendencies and attacks against them. The rise in the number of arson attacks against buildings hosting asylum seekers and mosques has created concern for immigrant communities in the west.

The anti-Muslim and anti-immigrant rallies have also increased under the umbrella of far-right organizations such as Patriotic Europeans Against the Islamization of the West (PEGIDA), throughout Europe and recently in Quebec, Canada, as well as the Australian far-right movement Reclaim Australia.

PEGIDA has spread across Europe with its warnings against the Islamization of European countries. Apart from Germany, anti-Islam demonstrations modeled on PEGIDA protests have been held in Norway and Belgium. The protests have also spread to small countries like Denmark and large ones like the U.K. and Spain as the presence of a significant number of Muslims has likely fuelled a resurgence in these countries.

In a rally by far-right Reclaim Australia organized on April 4, thousands of anti-Islam protesters clashed with anti-racism protesters in angry rallies around Australia.