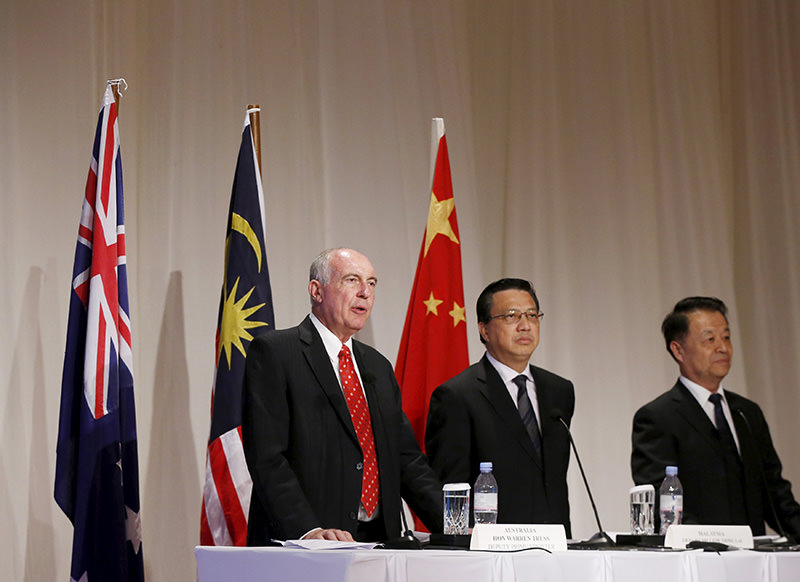 Officials from Australia, Malaysia and China (L-R) speak to the media after their meeting to discuss the next stage of the search for missing Malaysia Airlines flight MH370 in Kuala Lumpur, April 16, 2015 (Reuters Photo)
by Daily Sabah with Agencies Apr 16, 2015 12:00 am
The search area for the missing Malaysia Airlines flight MH370 will be doubled if nothing is found in the current search zone, Malaysia, Australia and China announced on Thursday.

A joint statement was released following a meeting of ministers from the three countries in Kuala Lumpur, saying that the Indian Ocean search zone would be expanded to 120,000 square kilometres (46,300 square miles) if nothing is found in the current area.

"Based on the advice of the experts of the search strategy working group, if the aircraft is not found within the current 60,000 square kilometres search area, we have collectively decided to extend the search by an additional 60,000 square kilometres within the highest-probability area," Malaysian Transport Minister Liow Tiong Lai said at a press briefing following their meeting.

The Boeing 777 with 239 passengers and crew aboard mysteriously veered off its route from Kuala Lumpur to Beijing on March 8, 2014, creating one of the world's greatest aviation mysteries and sparking a massive international effort to find it.

On board were 227 passengers and 12 Malaysian crew members. More than two-thirds of the passengers were from China.

Malaysia faced criticism for declaring all those on board officially dead in January. Relatives of the Chinese missing have demonstrated against the possible calling off of search efforts.

Australian authorities had earlier said the current search was expected to be completed in May.
Last Update: Apr 16, 2015 4:19 pm
RELATED TOPICS