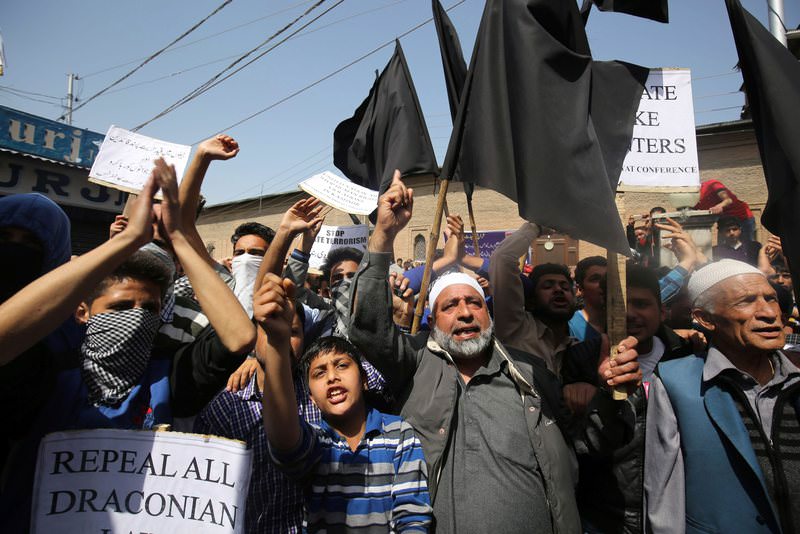 by Daily Sabah with AA Apr 17, 2015 12:00 am
Indian police have arrested a Kashmiri pro-independence leader on Friday on the orders of the regional and Indian government.

Only a month following his release from more than four years of imprisonment, Masarat Alam was arrested for the alleged waving of a Pakistani flag at a rally in Indian-held Kashmir.

Alam on Thursday told the media that he had not hoisted a Pakistan flag himself and said the flag was hoisted by a youth in the crowd.

Eyewitnesses confirmed Alam's claim but police in Indian-held Kashmir said that the arrest was made after pressure was created by the Indian media and government.

"Though the main allegation is about the Pakistan flag, the case against him is for leading a pro-Pak rally. We know from the footage that Alam had not raised the flags, but there is a consensus in the government for his arrest," a senior police official told AA.

Alam's release last month came after a new coalition government was formed in the state of Jammu & Kashmir, with the Kashmir-based Peoples Democratic Party and India's ruling right-wing Bharatiya Janata Party, who had never before been in power in Jammu & Kashmir.

The Bharatiya Janata Party were angered by the release of Alam, despite his release being ordered by judges as he had never faced formal charges.

While Alam was formally arrested, several other resistance leaders including 86-year-old Geelani have been put under house arrest by the regional government.

Clashes erupted in at least two places in Srinagar, the region's main city, shortly after Friday prayers as hundreds of young people tried to march through the streets to protest the killing of a 24-year-old civilian by the army earlier in the week.

The Indian police had said on Thursday evening that they had instructions from the government to not allow any rallies and heavy restrictions were put in place to stop the people from gathering.

Since 1989, Kashmiri resistance groups in Indian-held Kashmir have been fighting against Indian rule for independence, or for unification with neighboring Pakistan.

More than 70,000 people have reportedly been killed in the conflict so far and Indian maintains an army presence of over half a million troops in the region.
Last Update: Apr 17, 2015 6:38 pm
RELATED TOPICS