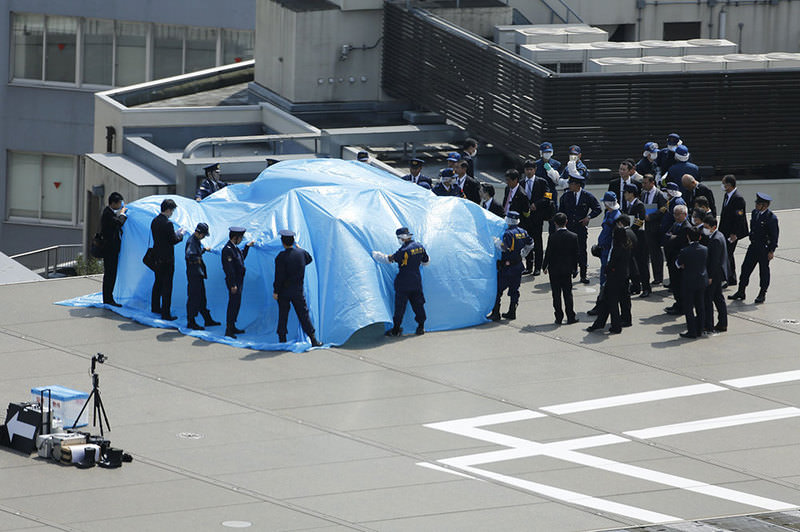 by Associated Press Apr 22, 2015 12:00 am
Japanese authorities were investigating after a small drone reportedly containing traces of radiation was found Wednesday on the roof of the prime minister's office, sparking concerns about drones and their possible use for terrorist attacks.

No injuries or damage were reported from the incident, and Prime Minister Shinzo Abe was in Indonesia to attend an Asian-African conference.

Police said it was not immediately known who was responsible for the drone. They were investigating the possibility it had crashed during a flight.

Chief Cabinet Secretary Yoshihide Suga said a drone landing at the prime minister's office was a wakeup call to problems caused by the unmanned aerial devices, including possible terrorist attacks when Japan hosts the 2020 Olympic Games in Tokyo.

"There is a possibility that drones might be used for terrorist attacks," Suga told a regular news conference. "Taking into consideration the latest incident, we will review drone use and measures for possible terrorist attacks using drones. We'll do our utmost to prevent terrorist attacks."

It was not clear when the drone landed. News reports said it was found by an official who was taking new employees on a tour of the prime minister's office in central Tokyo.

Video from public television broadcaster NHK earlier showed dozens of police officers and officials around the drone, which was covered by a blue tarp.

The drone was about 50 centimeters (1.7 feet) in diameter and had four propellers, carrying a small camera and a plastic bottle with unidentified content inside, according to Tokyo's Metropolitan Police Department. The drone was also decorated with a symbol that warns of radioactive material, according to NHK.

Small drones are becoming increasingly popular in Japan and are often used for performances, aerial filming and other purposes, but have been raising safety concerns.

In the United States in January, a wayward drone flown by an off-duty intelligence employee crashed on the White House grounds, raising questions over how commercial and consumer drones can be used safely in the U.S.

Japanese aviation laws have no restrictions for flying unmanned equipment at or below 250 meters (820 feet) above ground except for flight routes.