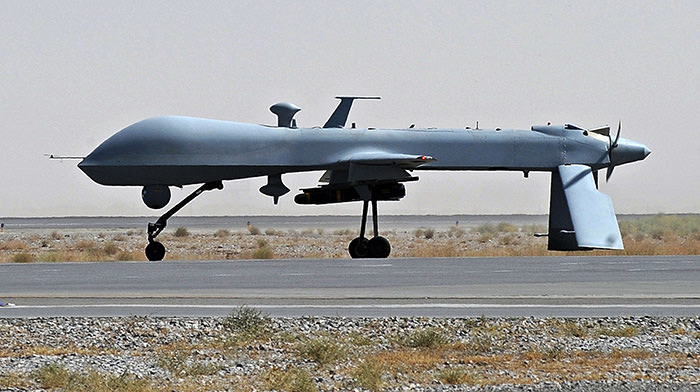 |AFP Photo
by Anadolu Agency Apr 24, 2015 12:00 am
Pakistan has released a statement saying that the accidental killing of two western hostages by a U.S. drone strike in January highlights the "unintended consequences" of using drones.

U.S. President Barack Obama apologized on Thursday for the deaths of an American and an Italian citizen in a strike that was purportedly targeting an Al-Qaeda compound in the restive northwestern tribal area.

"The death of Mr. Weinstein and Mr. Lo Porto in a drone strike demonstrates the risk and unintended consequences of the use of this technology that Pakistan has been highlighting for a long time," Pakistan's Foreign Office said in a statement released Friday.

The deaths of Dr. Warren Weinstein, a U.S. aid worker, and Giovanni Lo Porto, an Italian who went missing in Pakistan, have highlighted the concerns of human rights groups that drone strikes cause high civilian casualties.

There have been almost 3,500 people killed in more than 400 drone strikes in Pakistan since 2004.

According to international think tanks and human rights groups, including Amnesty international and the Bureau of Investigative Journalism, 70 percent of drone victims were unarmed civilians.
Despite Pakistan's public objections to the U.S. drone strikes, it is rumored to have given tacit approval to the ongoing controversial operations. Pakistan has also developed its own drone to use in the militant-hit northwestern tribal belt.
Last Update: Apr 24, 2015 6:44 pm
RELATED TOPICS