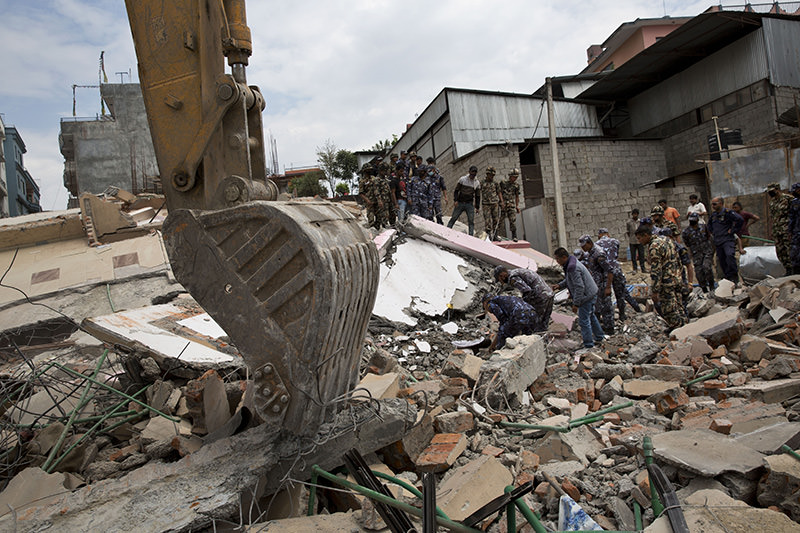 | AP Photo
by Daily Sabah with Wires Apr 26, 2015 12:00 am
A powerful aftershock struck the Nepalese capital Kathmandu on Sunday, causing Kathmandu residents to run into the streets, just a day after a devastating earthquake left thousands dead.

The cawing of crows mixed with terrified screams as the aftershock pummeled the capital city early Sunday afternoon. At magnitude 6.7, it was strong enough to feel like an another earthquake, and came as planeloads of supplies, doctors and relief workers from neighboring countries began arriving in this poor Himalayan nation.

The earthquake centered outside Kathmandu, the capital, was the worst to hit the South Asian nation in over 80 years. It destroyed swaths of the oldest neighborhoods of Kathmandu, and was strong enough to be felt all across parts of India, Bangladesh, China's region of Tibet and Pakistan. The death toll in Nepal climbed towards 2,500 on Sunday as rescuers unearthed the victims of a powerful earthquake. The figure, confirmed by Nepali police, has risen steadily as emergency services explore the wreckage of collapsed buildings, particularly in the Kathmandu valley.

Aid workers warned that the situation could be far worse near the epicenter. The U.S. Geological Survey said the quake was centered near Lamjung, about 80 kilometers (50 miles) northwest of Kathmandu, in the Gorkha district.

Roads to that area were blocked by landslides, hindering rescue teams, said chief district official Prakash Subedi. Teams were trekking through mountain trails to reach remote villages, and helicopters would also be deployed, he said by telephone.

The aid group World Vision said in a statement that remote mountain communities, including in Gorkha, were totally unprepared for the level of destruction caused by the earthquake.

Villages near the epicenter "are literally perched on the sides of large mountain faces and are made from simple stone and rock construction. Many of these villages are only accessible by 4WD and then foot, with some villages hours and even entire days' walks away from main roads at the best of times," the group's local staff member, Matt Darvas, said in the statement.

Nepal's worst recorded earthquake in 1934 measured 8.0 and all but destroyed the cities of Kathmandu, Bhaktapur and Patan.
Last Update: Apr 26, 2015 5:27 pm
RELATED TOPICS