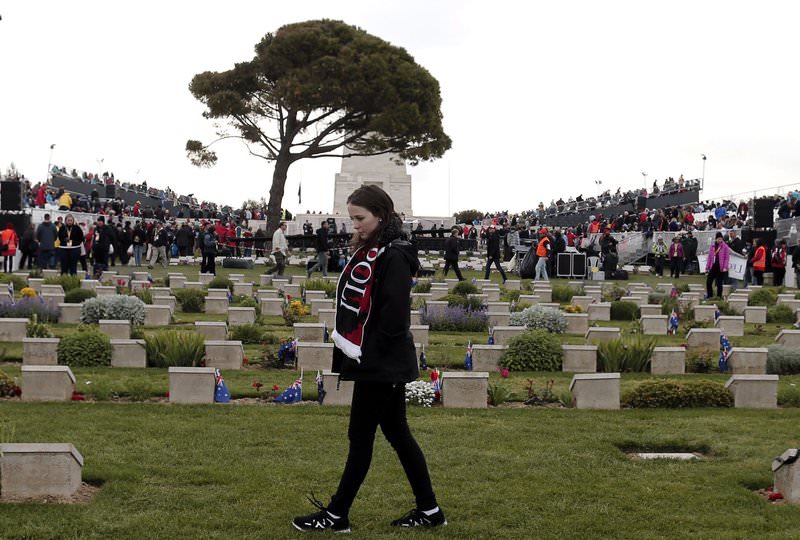 People attend the Australian Memorial Service at Lone Pine in commemoration of the Gallipoli War on Gallipoli peninsula, Canakkale Turkey, 25 April 2015 (EPA Photo)
by Daily Sabah with AA Apr 27, 2015 12:00 am
A sports presenter at Australian broadcaster SBS, Scott McIntrye has been sacked after his tweets about Anzac Day that were described as offensive and inappropriate by Australian Communcations Minister.

Scott McIntyre, a soccer reporter and presenter, had referred to some Australians marking the day as "poorly-read, largely white, nationalist drinkers and gamblers" on his officially verified Twitter account on Saturday night.

"Remembering the summary execution, widespread rape and theft committed by these 'brave' Anzacs in Egypt, Palestine and Japan," he added.

"Not forgetting that the largest single-day terrorist attacks in history were committed by this nation & their allies in Hiroshima & Nagasaki," he wrote to his 30,000 followers.

On Monday, the director of sport at McIntyre's employer SBS said that he had been sacked for disobeying an order to delete the posts, which had been openly criticized by Communications Minister Malcolm Turnbull.

Turnbull tweeted it was "Difficult to think of more offensive or inappropriate comments."

McIntryre's comments to his 30,000 followers were "'despicable' and deserve to be condemned," he added.

On Sunday, SBS managing director Michael Ebeid and director of sport Ken Shipp said in a statement that SBS had taken the decisive action to terminate McIntyre's position "with immediate effect."

It added that the channel supported "our Anzacs" and has devoted unprecedented resources to cover the 100th anniversary of landings at Çanakkale in Turkey.

ANZAC stands for Australian and New Zealand Army Corps, many of whom fought in the 1915 Battle of Çanakkale -- known as Gallipoli in Australia.