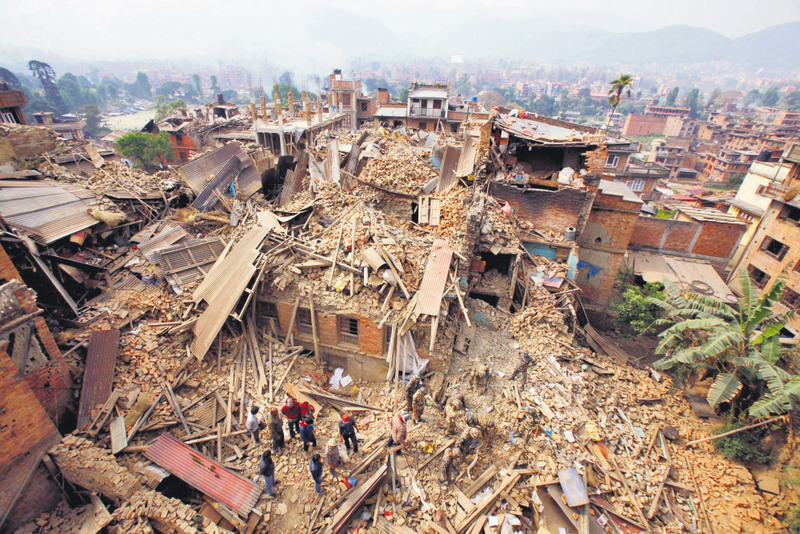 Nepal faces new difficulties as masses, suffering from insufficient medical facilities leave their towns to flee from the capital while the death toll has passed 3,000 and aftershocks cause new casualties

Thousands of Nepalis began fleeing the capital Kathmandu on Monday, terror-stricken by two days of powerful aftershocks and fearing shortages of food and water after an earthquake that killed more than 3,200 people. Roads leading out of the mountain valley city of one million were jammed with people, many with babies in their arms, trying to climb onto buses or hitch a ride aboard cars and trucks. Huge queues had formed at Kathmandu airport with people desperate to get a flight out. Many said they had slept in the open since Saturday's quake, either because their homes were flattened or they were terrified that aftershocks would bring them crashing down.

"We are escaping," said Krishna Muktari, who runs a small grocery store in Kathmandu city, standing at a major road intersection. "How can you live here? I have got children, they can't be rushing out of the house all night." Overwhelmed authorities were trying to cope with a shortage of drinking water and food, as well as the threat of disease.

The sick and wounded were lying out in the open in Kathmandu, unable to find beds in the devastated city's hospitals. Surgeons set up an operating theatre inside a tent in the grounds of Kathmandu Medical College. "We are overwhelmed with rescue and assistance requests from all across the country," said Deepak Panda, a member of the country's disaster management.

High in the Himalayas, hundreds of climbers were staying put at the Mount Everest base camp where a huge avalanche after the earthquake killed 17 people in the single worst disaster to hit the world's highest mountain. Rescue teams, helped by clear weather, used helicopters to airlift scores of people stranded at higher altitudes, two at a time.

Across Kathmandu and beyond, exhausted families laid mattresses out on streets and erected tents to shelter from rain. People queued for water dispensed from the back of trucks, while the few stores still open had next to nothing on their shelves. Crowds jostled for medicine at one pharmacy.

In the temple town of Bhaktapur, east of Kathmandu, centuries old buildings had collapsed and those that were still standing had cracks. Many residents were living in tents in a school compound. "We have become refugees," said Sarga Dhaoubadel, a management student whose ancestors had built her Bhaktapur family home four centuries ago. They were subsisting on instant noodles and fruit, she said. "No one from the government has come to offer us even a glass of water," she said. "Nobody has come to even check our health. We are totally on our own here. All we can hope is that the aftershocks stop and we can try and get back home."

A total of 3,218 people were confirmed killed in the 7.9 magnitude quake, a police official said on Monday, the worst in Nepal since 1934 when 8,500 died. More than 6,500 were injured. Another 66 were killed across the border in India and at least another 20 in Tibet, China's state news agency said. The toll is likely to rise as rescuers struggle to reach remote regions in the impoverished, mountainous country of 28 million people and as bodies buried under rubble are recovered.

"There is no electricity, no water. Our main challenge and priority is to restore electricity and water," said home ministry official Laxmi Prasad Dhakal. "The next big challenge is the supply of food. Shopkeepers are unable to go in and open their shops. So people are facing difficulty buying food." Several countries rushed to send aid and personnel. India flew in medical supplies and members of its National Disaster Response Force. China sent a 60-strong emergency team. Pakistan's army said it was sending four C-130 aircraft with a 30-bed hospital, search and rescue teams and relief supplies. A Pentagon spokesman said a U.S. military aircraft with 70 personnel left the United States on Sunday and was due in Kathmandu on Monday. Australia, Britain and New Zealand said they were sending specialist urban search-and-rescue teams to Kathmandu at Nepal's request. Britain, which believes several hundred of its nationals are in Nepal, was also delivering supplies and medics. However, there has been little sign of international assistance on the ground so far, with some aid flights prevented from landing by aftershocks that closed Kathmandu's main airport several times on Sunday.

The disaster has underlined the woeful state of Nepal's medical facilities. Nepal has only 2.1 physicians and 50 hospital beds for every 10,000 people, according to a 2011 World Health Organization report. Rajiv Biswas, Asia Pacific chief economist at business research firm IHS, said long-term reconstruction costs in Nepal using proper building standards for an earthquake zone could be more than $5 billion, or around 20 percent of the country's GDP. "With housing construction standards in Nepal being extremely low ... the impact of the earthquake has been devastating based on initial reports," he said in an early analysis of the likely damage.
Last Update: Apr 28, 2015 10:27 am
RELATED TOPICS