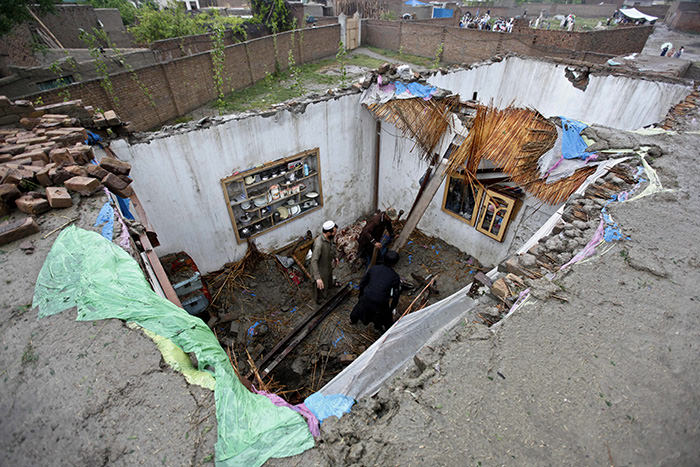 Intense rain and strong winds buffeted the city of Peshawar and adjacent districts late on Sunday, felling trees, causing dozens of roofs and walls to collapse and blocking many roads.

The injured include nearly 100 children, according to officials, while farmers have seen their produce badly affected.

"At least 44 people have been killed and 202 wounded. The storm followed by heavy rain and hailstorm has severely damaged wheat crops and orchards," Provincial Information Minister Mushtaq Ghani told AFP.

Ghani said that authorities were estimating the losses and expressed fear that hundreds of cattle have been killed.

Electricity was still suspended in Peshawar, the capital of northwestern Khyber Pakhtunkhwa province, and in parts of two nearby districts, Nowshera and Charsadda.

Ghani said at least 29 people were killed in Peshawar, 10 in Charsadda and five in Nowshera.

Aamir Afaq, a senior official of the provincial disaster management authority, confirmed the death toll and told AFP that efforts were underway "to provide food, shelters and emergency medical services to the affectees".

An AFP reporter in Peshawar said rescue workers were removing fallen trees to open roads while engineers from mobile phone companies were repairing the towers.

On Sunday evening, flood waters from the torrential rain reached a depth of a metre (three feet) in some parts of the city, which is home to more than three million people.

Initial estimates had put the death toll at 26 with 180 injured.

The military has been called in to boost rescue efforts, using ground-penetrating radars, concrete cutters and sniffer dogs, according to a tweet by the army spokesman.

Many of the more than 200 killed in last year's heavy monsoon rains died after roofs collapsed.