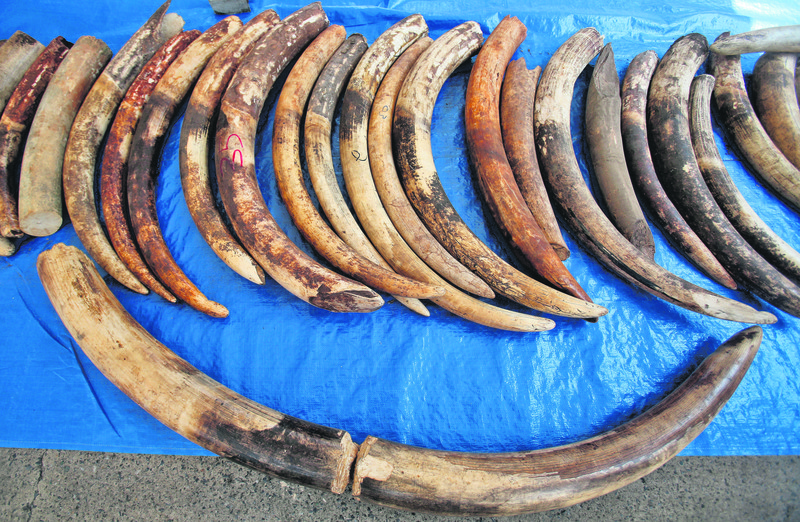 by Associated Press Apr 27, 2015 12:00 am
Thailand seized 3 tons of ivory hidden in tea leaf sacks from Kenya in the second-biggest bust in the country's history, one week after the biggest seizure, customs officials said Monday.

The 511 elephant tusks worth $6 million, bound for Laos, were seized upon arrival Saturday at a major port in Chonburi province in eastern Thailand. The bust came after customs officials received a tip-off in Laos and Thailand and tracked the containers from Kenya, Customs Department Director-General Somchai Sujjapongse told reporters.

The ivory, hidden among tea leaves, was shipped out of Kenya on March 24 and went through ports in Sri Lanka, Malaysia and Singapore before coming to Thailand, he said.

The bust came one week after Thai customs officials seized 4 tons of tusks that were smuggled from Congo and also destined for Laos in what they said was the nation's biggest seizure.

Somchai said that the tusks seized Saturday were "more beautiful and complete than the previous lot," and that they would likely have been distributed to buyers in China, Vietnam and Thailand had the shipment reached Laos.

Thailand is one of the top destinations for African ivory smuggling in Asia and could face international sanctions soon if it doesn't show progress in combatting the problem.

"After these two consecutive big busts ... the transnational crime networks must realize it is getting increasingly difficult to send their shipment past Thailand, but I think they will try to come up with the more complicated means, so we will have already prepared the measures to (tackle the issue)," Somchai said.

Poachers have killed tens of thousands of African elephants for their tusks in recent years to meet demand for ivory in Asia. China has imposed a one-year ban on ivory imports amid criticism that its citizens' huge appetite for ivory threatens the existence of Africa's elephants.
Last Update: Apr 28, 2015 5:23 pm
RELATED TOPICS