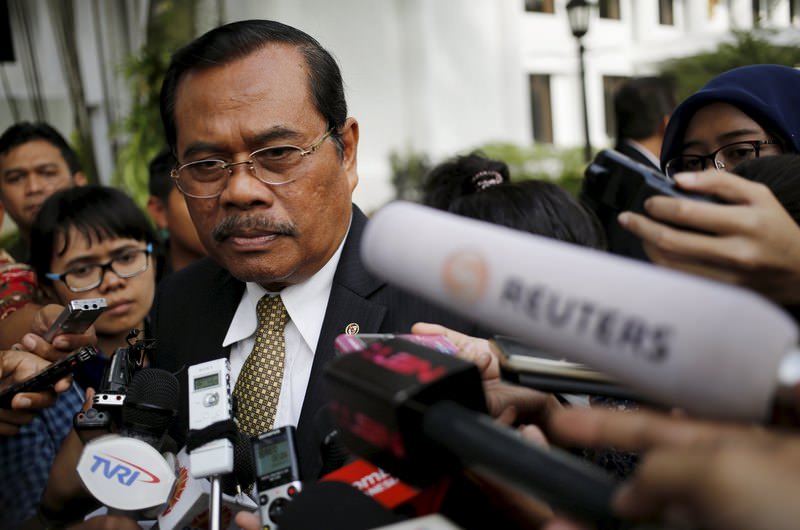 Indonesia's Attorney General Muhammad Prasetyo speaks to journalists about the upcoming executions at the Presidential Palace in Jakarta, Indonesia April 28, 2015 (Reuters Photo)
by Anadolu Agency Apr 28, 2015 12:00 am
Indonesia has executed eight convicted drug smugglers on Indonesian penal island early on Wednesday, with a Filipina spared at the last minute.

The Jakarta Post reported that the government had defied intense pressure from the international community to execute the eight death row prisoners early on Wednesday (late Tuesday GMT) on Nusakambangan prison island near Cilacap in Central Java.

Attorney General's Office spokesperson Tony Spontana said that the eight were shot by a firing squad, but Mary Jane Fiesta Veloso's execution had been delayed.

Among those executed were seven foreigners, including Australians Andrew Chan and Myuran Sukumaran.

Thirty-year-old Veloso was spared after the suspected recruiter who allegedly used her as a drug courier surrendered to Philippine police on Tuesday.

On Saturday, 72-hour execution notices were issued to the nine inmates, who were placed in isolation cells in Nusa Kambangan prison on Java island after losing a series of appeals.

Eight of them were shot by firing squad after midnight despite an international outcry and pleas for clemency.

For months, human rights advocates and the countries involved have been pressuring the Indonesian government for clemency.

Indonesia's policy of executing those convicted of involvement in drug smuggling has strained international relations.