Turkish humanitarian relief effort continues to save lives in Nepal 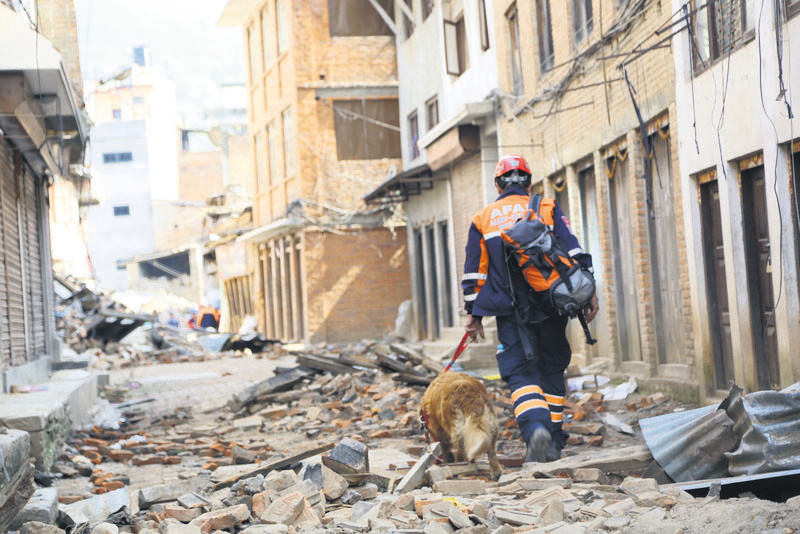 by daily sabah Apr 28, 2015 12:00 am
As the devastating effects of the earthquake continue to be felt in the Himalayan nation of Nepal, a Turkish search and rescue team continues its operations in the worst-hit places in the capital city of Kathmandu. The 26-strong rescue team, under the coordination of the Turkish Disaster and Emergency Authority (AFAD), rescued one injured man from the wreckage and found three dead bodies on Monday during the operations in Pukhulachhi. The Turkish search and rescue AFAD team, consisting of 65 people, arrived to the devastated country on Sunday and started humanitarian work in Nepal within 24 hours after the 7.8 magnitude earthquake resulted in the loss of more than 4,000 lives as well as thousands of injured people following the widespread destruction of buildings.

The Turkish aid organization has been working to rescue the survivors under the debris. Under the coordination of AFAD, 10 teams from the Turkish Health Ministry, three from Doctors without Borders, 13 from IHH Humanitarian Relief Foundation continue their humanitarian work in Nepal. Apart from emergency aid work, the Turkish Red Crescent sent blankets, tents and 6 tons of food, flown in by Turkish Airlines, from Pakistan and Bangladesh, while the National Medical Rescue Organization, known by its Turkish acronym UMKE, has sent 10 highly trained staff, according to Turkish state-run news agency Anadolu Agency. After the devastating earthquake shook Nepal, the country was hit by worsening humanitarian crisis as water, sanitation concerns rise among quake victims. Up to 8 million people have been severely affected by the humanitarian crisis, the United Nations reported on Monday. "According to initial estimations and based on the latest earthquake intensity mapping, 8 million people in 39 districts have been affected, of which over 2 million people live in the 11 severely affected districts," said the latest assessment from the U.N. Office of the Resident Coordinator. The U.N. Children's Fund (UNICEF) said nearly 1 million children in Nepal are in dire need of humanitarian assistance and are faced with limited access to safe water and sanitation and are at risk from waterborne diseases. The earthquake that hit Nepal on Saturday was the worst to hit the Himalayan region in more than 80 years. The death toll continues to increase, hitting 4,500 as of Tuesday. Yet, the final number could reach 10,000, according to a statement released by Nepal Prime Minister Sushil Koirala. "The government is doing all it can for rescue and relief on a war footing," Nepal prime minister said in an interview with Reuters. "It is a challenge and a very difficult hour for Nepal," he added while urging for more foreign humanitarian aid.
Last Update: Apr 28, 2015 9:05 pm
RELATED TOPICS