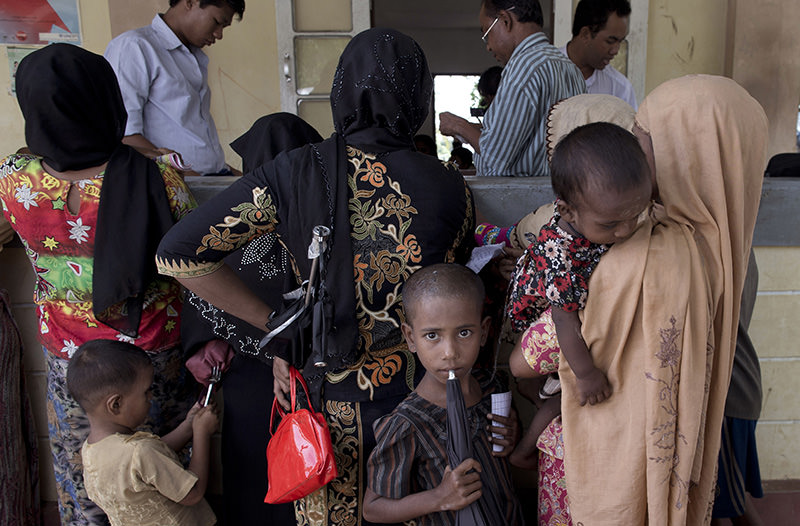 In this June 25 2014 file photo, Rohingya refugees gather to receive medicine at Dar Paing village clinic in Rakhine state, Myanmar (AP photo)
by Anadolu Agency Apr 28, 2015 12:00 am
The United Nations Office on Drugs and Crime (UNODC) has warned that human smuggling poses a significant threat to Asia and called on regional governments to help to stop it in its new report released on Tuesday.

A statement by UNODC's Asia-Pacific office announcing a report released on Tuesday said that a large number of migrants "use smugglers to cross borders in order to seek a better life, but end up in human trafficking situations."

It added, "Far away from home and working illegally, smuggled migrants have little ability to assert basic rights and become vulnerable to abuse, trafficking and exploitation."

The report identified Southeast Asia as a major source, transit point and destination for migrant smuggling, with "the majority of smuggling taking place within the region but with routes also reaching countries as far as Australia, New Zealand, Canada and the United States."

The 298-page report, titled "Migrant smuggling in Asia: current trends and related challenges," analyzed the smuggling of migrants in 28 states from the Middle East to the Pacific.

A section titled "Smuggling methods and routes" detailed the smuggling of Muslim Rohingya from western Myanmar to Malaysia via Thailand.

"Ethnic Rohingya use the services of smugglers to enter Thailand by sea, before travelling to Malaysia in search of work and shelter within established Rohingya communities in Kuala Lumpur and Penang," it said.

Although the report does not give specific figures for Rohingya, it said that 85,000 people originating in Myanmar entered Thailand illegally in 2013 - a 10 percent increase compared to 2012.

"Migrants smuggled by sea, for example from Bangladesh or Myanmar, to Malaysia or Thailand, are exposed to deadly risks," the report added. "[These risks] have been exacerbated at times by smugglers using unseaworthy vessels."

Jeremy Douglas, UNODC's Asia-Pacific representative, warned in the statement that cross-border movements across Asia are increasing "at unprecedented levels, in part due to new infrastructures projects and the opening of borders."

He therefore called on regional governments to set up comprehensive policies "to address migrant smuggling, embedded in wider trafficking, migration and development policies."

The report recommended - among other measures - the strengthening of data generation and the improvement of national laws and policies while protecting the rights of migrants.

The capacities of officials at border crossings should also be enhanced, it said, so they can identify and investigate smuggling and trafficking networks.

Earlier this month, more than 300 enslaved fishermen were found and rescued from a remote Indonesian island, among them 58 Cambodians.

It is not uncommon for Cambodians to pay brokers to smuggle them to countries like Thailand, only to then be forced to work in slave-like conditions aboard fishing boats. The International Organization for Migration (IOM) has said people in such cases are left vulnerable when they do not have proper paperwork.

The IOM is currently in the process of trying to repatriate the workers to their home countries from Indonesia.
Last Update: Apr 28, 2015 12:35 pm
RELATED TOPICS