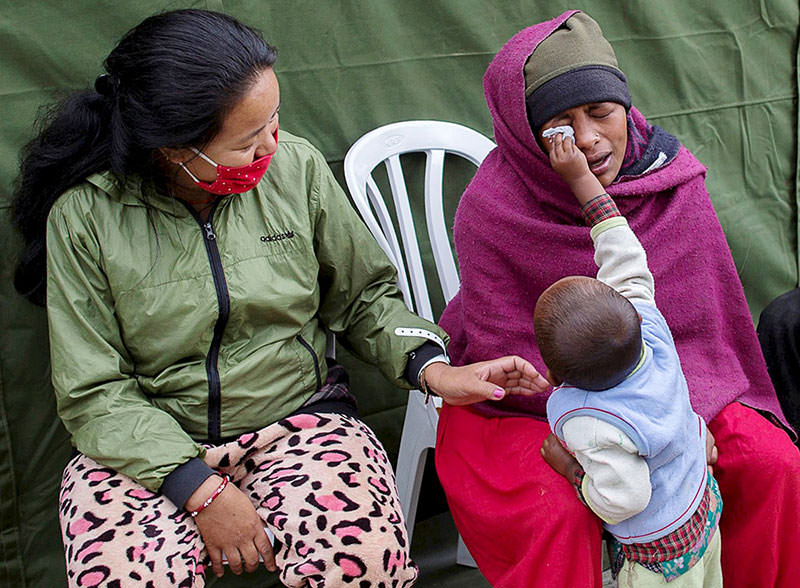 Jamna Pariar, 22, is comforted by her son after she learnt about the death of her nine-day-old daughter at the Israel Defence Forces (IDF) field hospital, following Saturday's earthquake in Kathmandu, Nepal (Reuters)
by reuters Apr 29, 2015 12:00 am
Thousands of people injured by a devastating earthquake in Nepal could be left with permanent disabilities if they are not treated quickly and given proper care and rehabilitation, aid workers warned on Wednesday.

The 7.8 magnitude quake killed more than 5,000 people and injured at least 10,000 when it shook the Kathmandu Valley where the Nepali capital is located, on Saturday, toppling buildings, burying settlements and triggering avalanches at Mount Everest.

The United Nations says up to eight million people in 39 of Nepal's 75 districts have been affected by the disaster, and that as well as water, food and tents, medical aid was needed.

Aleema Shivji, director of Handicap International in Britain, said it was difficult to estimate the total number of wounded - but with many survivors stranded in remote villages closer to the quake's epicentre, it could be up to 50,000.

"We are likely to find spinal cord and head injuries as well as people with multiple fractures ... and we expect to see a large number of amputations," Shivji told the Thomson Reuters Foundation by phone from London.

"It is important that wounds are taken care of immediately to avoid the risk of permanent disability," she said adding that Handicap International was distributing wheelchairs designed specially for rugged terrain, and flying in aid such as crutches and mattresses for people with spine injuries.

A Nepali-French rescue team on Tuesday pulled a 28-year-old man from a collapsed apartment block in Kathmandu after he spent around 80 hours trapped in a room with three dead bodies.

Doctors said they planned to amputate one of his legs because it had been damaged by internal bleeding.

Up to 90 percent of the health facilities in the worst-affected districts of Ramechapp, Nuwakot, Sindhupalchowk and Gorkha have been severely damaged, it said, and many hospitals are treating people out in the open.

Aid workers said they expected the situation to be worse outside the capital Kathmandu where fuel shortages meant that hospitals, which were being run on generators, are suffering power cuts and a lack of water.

Aid workers said there was a need for surgeons, anaesthetists, physiotherapists and trauma experts - as well as mobile hospitals equipped with everything from painkillers and antibiotics to surgical tools, beds and anaesthesia machines.

Post trauma and rehabilitation care will also be needed in the coming days as patients will require follow-up support to ensure they can recover as quickly as possible.

"The problems may be higher in smaller towns and villages where no rescuers have reached as roads are damaged or blocked by landslides and helicopters are unable to land," said Ronald Kremer, Medical Emergency Coordinator for Medecins Sans Frontieres Netherlands.

"Four days after the disaster, there will be people with untreated injuries, and with that will come a high risk of infection. Some people will likely face amputations where legs, hands, arms and fingers cannot be saved."