US Marine helicopter, deployed for aid, gone missing in Nepal 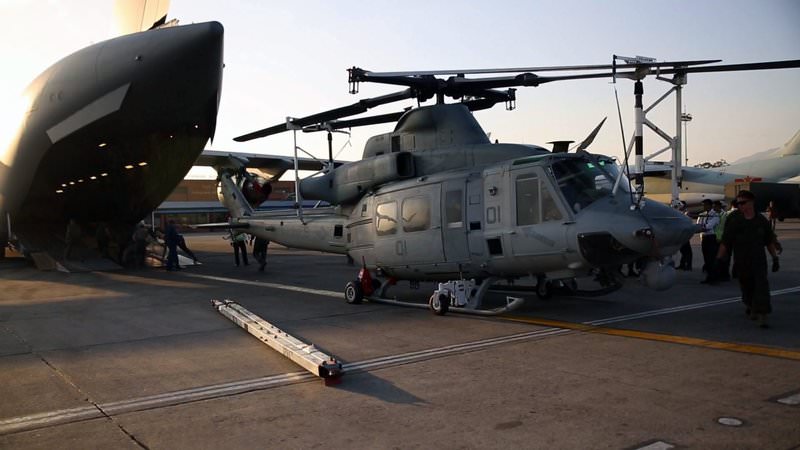 A handout file picture dated 03 May 2015 and provided by the US Marine Expeditionary Force shows US Marines unloading a UH-1Y Huey helicopter from a Boeing C-17 Globemaster III at Tribhuvan International Airport in Kathmandu, Nepal (EPA Photo)
by Daily Sabah with AFP May 12, 2015 12:00 am
US officials said a US Marine Corps helicopter, deployed for earthquake relief in Nepal, was reported missing on Tuesday with eight personnel on board.

"The incident occurred near Charikot, Nepal while the aircraft was conducting humanitarian assistance and disaster relief operations," said Major Dave Eastburn, spokesman for US Pacific Command.

The UH-1Y Huey had just dropped off supplies and was headed to another destination, officials said.

Before the chopper went missing, there was "some chatter about a fuel problem" on the radio from the helicopter crew, Pentagon spokesman Colonel Steven Warren said.

A search by US aircraft before nightfall had not spotted any sign of smoke or any crash site, raising hopes the helicopter may have made a safe emergency landing, he said.

The Nepalese army was conducting a search on the ground but no aircraft could fly until daylight to look for the crew.

So far there is no beacon signal detected from the helicopter crew, officials said.

The chopper was carrying six US Marines and two soldiers from the Nepalese army, officials said.

About 300 US military troops have deployed to support the relief effort in Nepal, where aftershocks continue to claim lives after last month's massive quake.

Relief teams from around the world are still working to provide water, food and medical assistance to Nepalis after the April 25 quake.
Last Update: May 13, 2015 10:25 am
RELATED TOPICS