Burundian army divided after coup attempt, president out of country 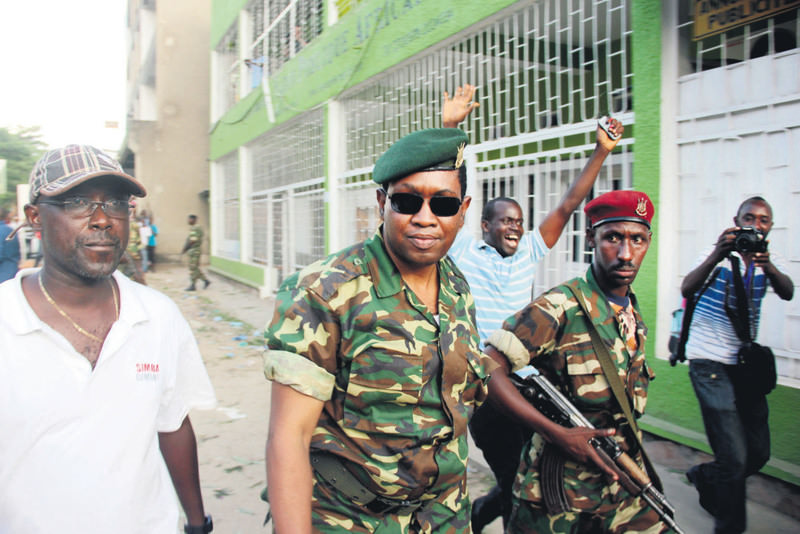 by May 14, 2015 12:00 am
Burundi's armed forces chief announced Thursday that an attempted coup against President Pierre Nkurunziza had failed, although the claim was quickly denied by opponents of the central African nation's leader. There was also uncertainty over the whereabouts of Nkurunziza, whose attempt to return home from Tanzania after the coup was announced was blocked after his opponents seized the airport. A top Burundian general, former intelligence chief Godefroid Niyombare, launched the coup on Wednesday, capping weeks of violent protests against the president's controversial bid for a third term. The general has ordered the closure of Bujumbura International Airport and the landlocked nation's borders, and declared he had the support of "many" high-ranking army and police officials. Hundreds of people took to the streets in celebration after the coup announcement, shouting "victory!" and sounding car horns. Cheering crowds were also seen walking alongside marching soldiers and climbing aboard tanks in the lakeside capital. But in an overnight broadcast on state radio, armed forces chief General Prime Niyongabo said the coup had been stopped and that pro-Nkurunziza forces controlled the presidential office and palace. "The national defense force calls on the mutineers to give themselves up," he added on state radio, also under the control of forces loyal to the president, who have fired warning shots to keep back protestors. However, a spokesman for the anti-Nkurunziza camp, Burundi's police commissioner Venon Ndabaneze, told Agence France-Presse (AFP) the claim was false and that his side was in control of facilities including Bujumbura International Airport. "This message does not surprise us because the general has long been allied to the forces of evil and lies," he said. The latest radio announcement and the denial signals that the outcome of the coup attempt remains uncertain and that overnight negotiations within the armed forces, which appears sharply divided over the issue, may have failed.

The crisis has raised fears of a return to widespread violence in the impoverished country, which is still recovering from a brutal 13-year civil war that ended in 2006. Hundreds of thousands of people were killed in the conflict marked by massacres between the majority Hutu and minority Tutsi communities. Speaking late Wednesday to France24, General Niyombare said there was still "some confusion" and that "things will become clear" on Thursday.

Nkurunziza's precise whereabouts outside the country remained uncertain amid speculation his plane had to turn back on Wednesday or that he may have traveled to a third country elsewhere in the region. An AFP correspondent confirmed the airport in the Burundian capital had been shut and appeared to be in the hands of pro-coup forces. The attempted coup sparked international alarm, with Washington urging Burundians to "lay down arms, end the violence and show restraint." Those calls were echoed by the European Union, which warned it was "essential the situation does not spin out of control." U.N. Secretary General Ban Ki-moon also made an urgent appeal for calm while the U.N. Security Council said it would hold an emergency meeting on the situation on Thursday. In his message announcing the coup, Niyombare signaled he did not want to take power himself, vowing to form a "committee for the restoration of national harmony" and work for "the resumption of the electoral process in a peaceful and fair environment." Niyombare is a highly respected figure who was sacked from his intelligence post in February after he opposed Nkurunziza's attempt to prolong his 10-year rule.

More than 22 people have been killed and scores wounded since late April, when Burundi's ruling National Council for the Defense of Democracy–Forces for the Defense of Democracy (CNDD-FDD) party, which has been accused of intimidating the opposition and arming its own militia, nominated Nkurunziza to stand for re-election in June 26 polls. Clashes between protesters and police early Wednesday, before the coup was announced, left two civilians and a police officer dead, according to the Burundian Red Cross. At least 66 people were injured, it added. More than 50,000 Burundians have fled the violence to neighboring countries in recent weeks, with the U.N. preparing for thousands more refugees. Opposition and rights groups insist that it is unconstitutional for Nkurunziza, who has been in office since 2005, to run for more than two terms. The president, however, argues that his first presidential term did not count as he was elected by parliament, not directly by the people. Asked to rule on the issue, Burundi's constitutional court found in his favor, but not before one of the judges fled the country, claiming its members were subject to death threats. The African Union, EU and United States have condemned the third-term bid by Nkurunziza, a former rebel leader from the Hutu majority and born-again Christian, who believes he ascended to the presidency with divine backing.
Last Update: May 14, 2015 11:07 pm
RELATED TOPICS