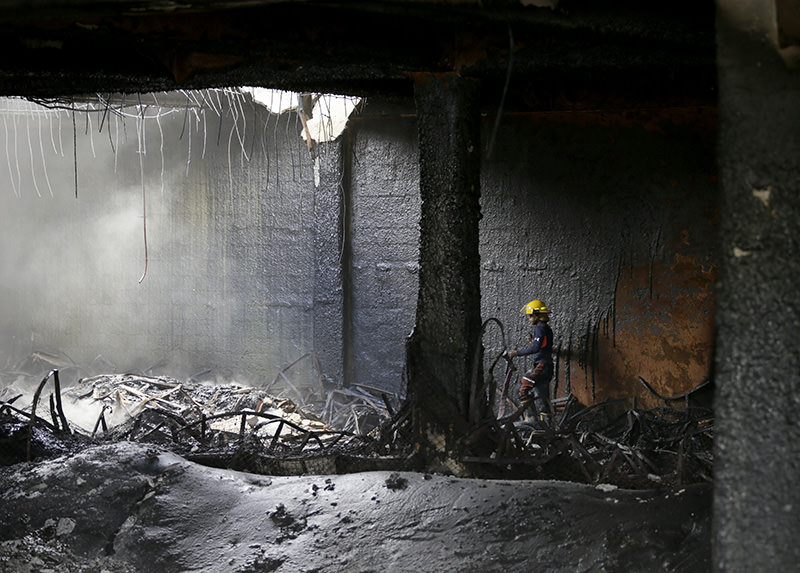 | AP Photo
by Daily Sabah with Agencies May 14, 2015 12:00 am
Philippine police have opened a criminal investigation into a factory fire that killed at least 72 factory workers on Thursday as a criminal matter.

All bodies were believed to have been retrieved from the gutted two-story Kentex Manufacturing Corp. rubber slipper factory, a day after the fire raged for over five hours in the Manila suburb, said Valenzuela city police chief Rhoderick Armamento.

The focus shifted to identifying the bodies and investigating the cause of the blaze, he said.

At a village hall, 69 bodies were lined up as relatives wearing surgical masks streamed in batches to try to identify the charred remains through jewelry or other personal items. Three victims were identified earlier.

Among the questions being raised are whether the factory followed fire and building safety standards.

Dionisio Candido, whose daughter, granddaughter, sister-in-law and niece were among the missing, said iron grills reinforced with fencing wire were covering the windows on the second floor that "could prevent even cats from escaping."

Iron grill bars on windows are common in offices, factories and homes in the Philippines to keep away thieves. In workplaces or factories, they are also meant to prevent employees from stealing equipment or products.

He said authorities allowed him to enter the gutted building, where he saw charred remains "piled on top of each other."

Police will file charges against "all those accountable and those at fault," said police Deputy Director General Leonardo Espina.

Interior Secretary Mar Roxas said, "There were reports that as many as 200 workers were employed by the factory but we are checking if all of them were around when the fire happened."

Mayor Rex Gatchalian said that a workers log book was lost in the fire and the foreman was among the dead, making it difficult to determine how many were inside the factory at the time.

Gatchalian said the fire was apparently ignited by sparks from welding work at the factory's main entrance door, triggering an explosion of the chemicals used to make the slippers. Workers fled to the second floor where they were trapped, he said.

District Fire Marshal Wilberto Rico Neil Kwan Tiu said that the building had other exits but apparently the workers were overwhelmed by the thick black smoke from the burning rubber and chemicals, which are highly flammable and caused the blaze to spread quickly.
Last Update: May 14, 2015 5:42 pm
RELATED TOPICS