Tensions rise between US and China over South China Sea 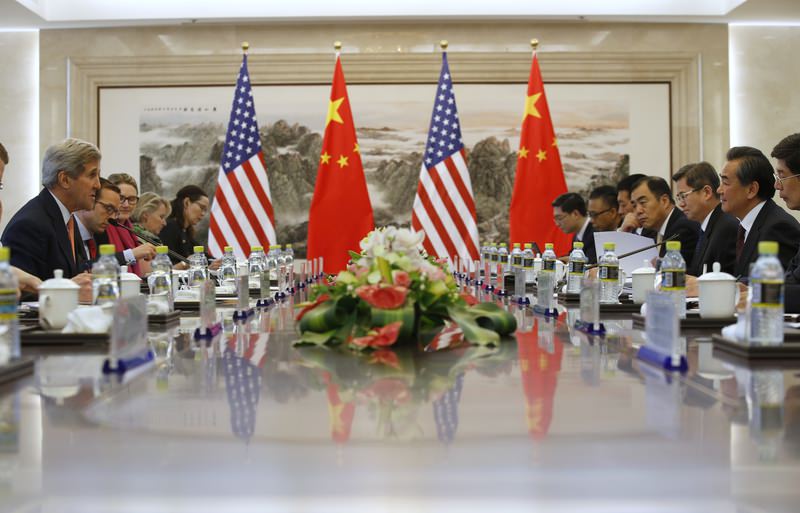 U.S. Secretary of State John Kerry, left, holds a talk with Chinese Foreign Minister Wang Yi, second right, in Beijing, China (AP Photo)
by May 16, 2015 12:00 am
The United States and China has clashed over a territorial dispute in the South China Sea on Saturday, as China's foreign minister asserted its sovereignty to reclaim reefs saying its determination to protect its interests is "as hard as a rock".

After a private meeting with U.S. Secretary of State John Kerry, China's Foreign Minister Wang Yi showed no sign of backing down despite Kerry urging China to take action to reduce tension in the South China Sea.

"With regard to construction on the Nansha islands and reefs, this is fully within the scope of China's sovereignty," Wang told reporters, using the Chinese name for the Spratly islands.

"I would like to reaffirm that China's determination to safeguard its sovereignty and territorial integrity is as hard as a rock," he said. "It is the people's demand of the government and our legitimate right."

Wang made the comments at a joint news conference with Kerry, who is on a two-day visit to China likely to be dominated by deepening concern about Beijing's ambitions in the South China Sea.

China's rapid reclamation effort around seven reefs in the Spratly archipelago of the South China Sea has alarmed other claimants such as the Philippines and Vietnam.

At the same time, China has expressed its concern about a possible U.S. plan to send military aircraft and ships to assert freedom of navigation in the South China Sea.

Kerry did not respond when asked to clarify whether the United States intended to follow through on what a U.S. official on Tuesday said was a proposal to send U.S. military aircraft and ships within territorial limits China asserts around reclaimed land.

The United States does not take a position on the rival territorial claims in the South China Sea, but says international law does not allow for sovereignty to be "manufactured" by building up underwater reefs.

Kerry said the United States had stated its concerns about the pace and scope of China's land reclamation in the sea.

"I urged China through Foreign Minister Wang to take actions that will join everybody in helping to reduce tensions and increase the prospect of a diplomatic solution," he said.

He said he believed he and Wang agreed the region needed "smart diplomacy" in order to conclude a code of conduct between the Association of Southeast Asian Nations and China, "and not outposts and military strips" - an apparent reference to airstrips the United States believes China is building on reclaimed land.

Kerry said the United States and China had "a lot

to accomplish together ... as two of the world's major powers and largest economies" and that millions of people around the world depended on them to ensure "high standards of behavior and aspiration".

Wang said that while both countries had differences on the South China Sea, they were committed to freedom of navigation and peace and stability in the area and added that China hoped to continue a dialogue to improve understanding on the issue.

The South China Sea dispute is the latest source of friction between the world's two biggest economies, which have sparred over everything from trade and human rights to exchanges of accusations of hacking.

Despite this, they cooperate in many areas such as climate change, North Korea and Iran.

Recent satellite images have shown that since about March 2014, China has conducted reclamation work at seven sites in the Spratlys and is constructing a military-sized air strip on Fiery Cross Reef and possibly a second on another reef.

The Philippines, a U.S. treaty ally, has called for urgent action.

China rejects U.S. involvement in the dispute and has blamed the United States for stoking tension by encouraging countries to engage in "dangerous behavior". China has reiterated that the only way to address the issue is through bilateral talks.

On North Korea, Kerry said he was hopeful a potential nuclear deal with Iran could be a "message" for Pyongyang, but added that whether or not North Korea "is capable of internalizing that kind of message, that's still to be proven".

Kerry's trip is intended to prepare for annual U.S.-China Strategic and Economic Dialogue next month in Washington and President Xi Jinping's expected visit to Washington in September.