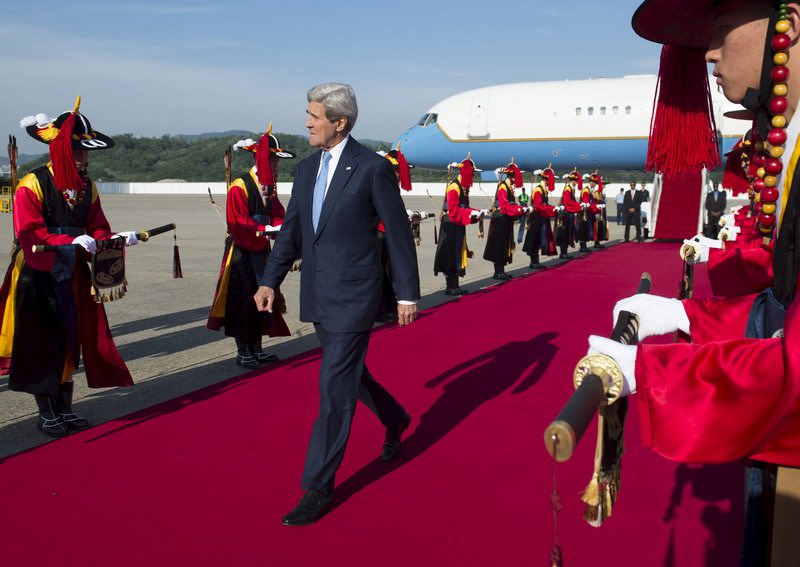 by Daily Sabah with AP May 17, 2015 12:00 am
U.S. Secretary of State John Kerry is in South Korea to discuss security issues amid fresh fears of North Korean belligerence and delivering a speech on cyber policy.

Kerry arrived in Seoul on Sunday from Beijing and will see top South Korean officials on Monday, less than a week after South Korea's spy agency said North Korean leader Kim Jong Un ordered his defense chief executed with an anti-aircraft gun for complaining about the young ruler, talking back to him and sleeping during a meeting Kim presided over.

That allegation, if true, adds to concerns about the erratic nature of Kim's rule, particularly after North Korea claimed last weekend it had successfully test-fired a newly developed ballistic missile from a submarine.

Those actions come despite a recent U.S. diplomatic overture to North Korea to discuss resuming denuclearization talks that have been stalled for the past three years. The U.S. quietly proposed a meeting with North Korea in January, before the U.S. and South Korea began annual military exercises that North Korea regards as a provocation. The two sides, however, failed to agree on who could meet and where.

In light of the new developments, Kerry plans to reiterate America's ironclad commitment to the security of South Korea, U.S. officials said.

On Saturday in Beijing, Kerry expressed hope that the successful conclusion of a nuclear deal with Iran will send a positive message to North Korea to restart negotiations on its own atomic program.

Kerry said he believed an Iran agreement could have "a positive influence" on North Korea, because it would show that giving up nuclear weapons improves domestic economies and ends isolation.

He stressed, though, that there was no way to tell if North Korea's reclusive leadership would be able to "internalize" such a message.

International negotiators are rushing to finalize a nuclear deal with Iran by the end of June under which Iran's program would be curbed to prevent it from developing atomic weapons in exchange for the lifting of international sanctions that have crippled its economy.

Nuclear talks with North Korea, which has already developed atomic weapons despite previous attempts to forestall it, broke down three years ago as it has continued atomic tests and other belligerent behavior, including ballistic missile launches.

North Korea conducted its first nuclear test in 2006 and is now believed to have at least 10 such weapons despite some of the toughest international sanctions in existence. It conducted its third nuclear test in February 2013, and U.S.-based experts forecast that it could increase its nuclear arsenal to between 20 and 100 weapons by 2020.

In addition to talks on issues related to North Korea, Kerry in Seoul will be laying the groundwork for a visit to Washington in June of South Korean President Park Geun-hye.

After his meetings on Monday, Kerry is to deliver a speech on cyber security and related issues. Both North Korea and China pose major cyber security challenges. South Korea has faced hacking attacks it has blamed on North Korea, and the United States accuses the North of being behind the massive attack on Sony Pictures last year that resulted in new U.S. sanctions.
Last Update: May 18, 2015 1:38 am
RELATED TOPICS