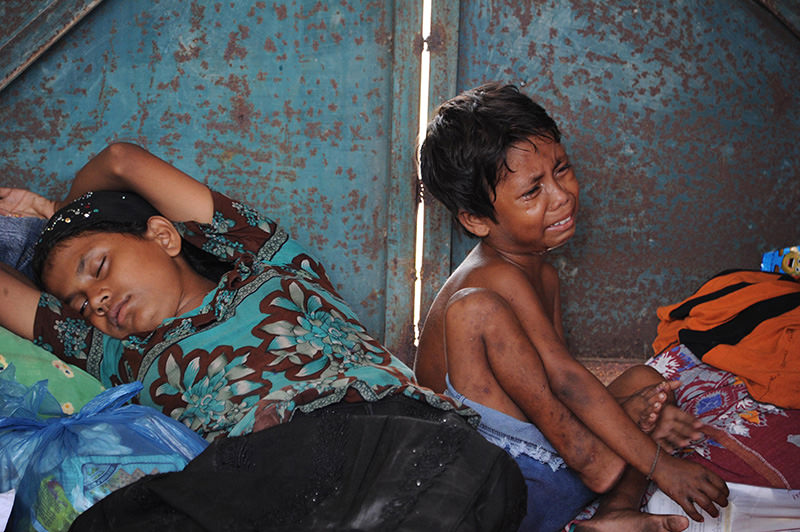 A young boy and his mother rest in a shelter after their arrival at the new confinement area in the fishing town of Kuala Langsa in Aceh province on May 15, 2015 (AFP Photo)
by Compiled from Wire Services May 18, 2015 12:00 am
Around 8,000 migrants from Myanmar and Bangladesh have been waiting to be rescued at sea with nowhere to go in South-east Asia without water and food while residents in the Indonesian province of Aceh, who saved at least 700 migrants last week, trying to help migrants with their own means. However, a fisherman from Aceh told BBC that the Indonesian officials told them not to save migrants even if they drown.

With the rescued migrants, the number of illegal migrants reached 1,500 in Aceh. Military spokesperson Fuad Basya said fishermen could deliver food, fuel and water to the boats, or help with repairs, but bringing them to the shore would constitute an illegal entry into Indonesia, BBC reported.

But some fishermen in Aceh had told the BBC that they were not allowed to help migrants even if they were drowning.

Meanwhile UNCHR spokeswoman Vivian Tan said the lack of rescue efforts over the weekend was a bad sign.

Aid agencies say the world is on the brink of a grave humanitarian crisis as countries in the region refuse to accept the migrants.

Meanwhile Myanmar on Monday acknowledged international "concerns" about waves of boat people many of whom are fleeing persecution, but denied it is solely to blame as thousands languish in dire straits at sea.

The comments came as fresh details emerged from migrants of brutal fighting with metal bars and knives that left at least 100 dead as food and water dwindled on their rickety vessel as it drifted in Indonesian waters.

Navy ships from Malaysia, Thailand and Indonesia intercepted boats last week packed with desperate, hungry migrants, giving them food and water and sending them away, a move that drew strong international criticism.

It also sparked outrage in Malaysia, a predominantly Muslim country, where sympathetic citizens and Muslim groups have launched donation drives to collect food, clothing and medical aid for a boatload of more than 1,100 migrants who landed at a Malaysian island on May 10 and are being held at a detention camp.

Since 2012, Rohingya Muslims - who the United Nations consider to be the world's most persecuted ethnic minority - have been fleeing Myanmar in droves, in fear of violence that some human rights groups consider to be state-sponsored.
Last Update: May 18, 2015 3:51 pm
RELATED TOPICS