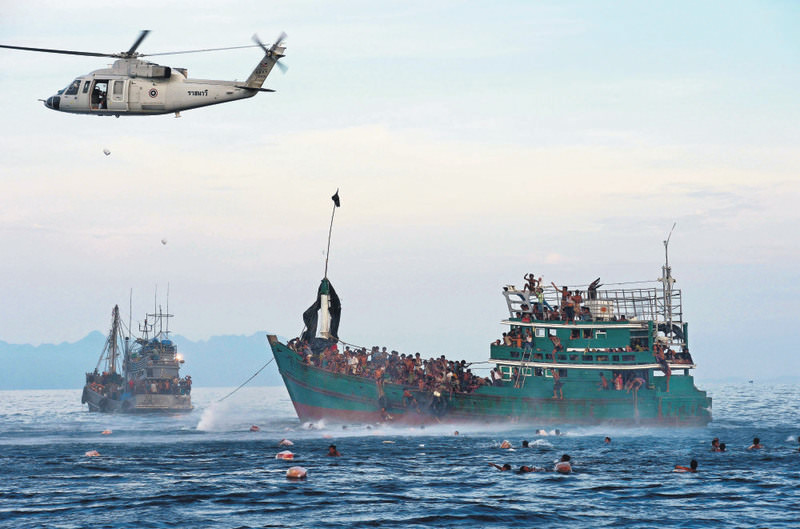 Rohingyan migrants try to collect the delivered food while any country does not accept them.
by Daily Sabah with Wires May 18, 2015 12:00 am

With at least 6,000 Rohingya migrants believed to be stranded on smuggler boats in the Andaman Sea, Myanmar's inaction has been severely criticized by Southeast Asian countries

A stern warning to Myanmar from Southeast Asian countries over the mass Rohingya Muslims exodus will soon come into effect as neighboring countries face a crisis of thousands of migrants being stranded at sea and washing ashore. The estimated 6,000 refugees are stranded at sea in at least six boats off Indonesia, Thailand and Malaysia. However, no urgent action was issued to end the humanitarian disaster. In order to tackle the migrant issue, a proposed meeting with the foreign ministers of Myanmar, Indonesia and Thailand will be held this week under the chairmanship of ASEAN, the association of Southeast Asian Nations.

Since Thailand launched a crackdown on human trafficking in its southern region on May 1, boatloads of Bangladeshi and Rohingya migrants – mostly fleeing Myanmar – have been turning up on Malaysian and Indonesian shores. All three countries have since announced plans to turn the vessels back, unless they are unseaworthy and sinking. Thailand has since reneged, however, saying it may let smaller boats in. On Sunday, Malaysian Foreign Minister Anifah Aman met his Bangladeshi counterpart A.H. Mahmood Ali to discuss matters related to the surge in illegal boat people travelling to the region, among other issues.

Amid growing international pressure to end migrant tragedies at sea, the Myanmar government has yet to respond to the crisis. "If Myanmar fails to respond by then [Wednesday], then Malaysia will use a certain clause of ASEAN chairmanship to call for the grouping's emergency meeting to deliberate on the matter on a larger scale," a Malaysian official told Anadolu Agency.

Human Rights Watch called on Southeast Asian nations to end the mass flight of Rohingya who are subjected to widespread rights abuses by the Myanmar government, saying that "ending discriminatory policies and ensuring full security so that Rohingya can return to their homes safely and with dignity in Arakan State would be a good place to start."

"The Burmese government has created this crisis with their continued persecution of the Rohingya," Phil Robertson, deputy Asia Director of HRW said. "Thailand, Malaysia, and Indonesia have made things much worse with cold-hearted policies to push back this new wave of 'boat people' that puts thousands of lives at risk. Other governments should urge the three governments to work together to rescue these desperate people and offer them humanitarian aid, help in processing claims, and resettlement places for those in need of international protection.

"The Thai, Malaysian, and Indonesian navies should stop playing a three-way game of human ping pong, and instead should work together to rescue all those on these ill-fated boats," he added. "The world will judge these governments by how they treat these most vulnerable men, women, and children."

Since the crisis erupted in Myanmar, more than 125,000 Rohingya Muslims have fled oppression in Buddhist-majority Myanmar, paying huge sums to human smugglers. But faced with a recent regional crackdown, the smugglers have abandoned the ships, leaving an estimated 6,000 refugees stranded at sea as Southeast Asian nations refuse to let them come to shore.

The U.N. considers Rohingyas to be one of the most persecuted minorities in the world. Despite many families having lived in Myanmar for generations, government authorities still consider them to be illegal immigrants from neighboring Bangladesh. Rohingya Muslims have long been subjected to severe discrimination and violence under the Burmese dictatorship. The violent surge of Buddhist nationalism against minority Muslim communities in the state of Rakhine in Myanmar makes them the victims of political and religious extremism. Rohingya is a Muslim ethnic group who are not recognized among the 134 official ethnicities of Myanmar, nor are they recognized as citizens of Myanmar because the government authorities see them as illegal immigrants from neighboring Bangladesh. They suffer from statelessness as they are deprived of the right to nationality.
Last Update: May 18, 2015 9:27 pm
RELATED TOPICS