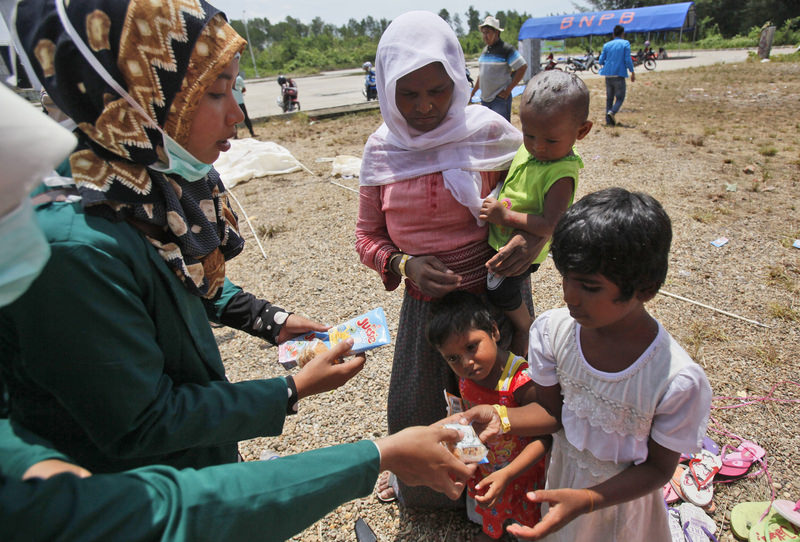 Acehnese students hand out snacks to ethnic Rohingya children at a temporary shelter in Langsa, Aceh province, Indonesia, Monday, May 18, 2015 (AP Photo)
by Anadolu Agency May 19, 2015 12:00 am
A group of Filipino Muslims from academic, civil society, inter-religious, government, and business sectors said that they would welcome Rohingya "boat people" currently stuck at sea off Southeast Asian shores if they were to land in the Philippines south on Tuesday.

Professor Ali Yacub, the Muslim convener of the Inter-Religious Solidarity Movement for Peace, told Anadolu Agency that if boats carrying Rohingya fleeing persecution in Myanmar were to land in Mindanao they would be welcomed with open arms.

"There is no reason for our country not to welcome them," Yacub stressed.

"As Muslims, we should take care of our brothers and sisters in Islam especially those poor who are seeking help, and in times of adversity."

Since May 1, Thailand has been cracking down on human trafficking in its southern region, forcing boatloads of migrants-Rohingya and Bangladeshi -- to beach in Thailand, Malaysia and Indonesia.

On Tuesday, Yacub - speaking for the group - appealed to the governments of Myanmar, Thailand, Bangladesh, Malaysia, Indonesia, and other countries in Southeast Asia, "to not neglect and drive away Rohingya."

He then condemned the Myanmar government for their actions against Rohingya Muslims.

Since 2012, Rohingya - who the United Nations consider to be the world's most persecuted ethnic minority - have been fleeing Myanmar in droves, in fear of violence that some human rights groups consider to be state-sponsored.

Yacub said that Filipino Muslims have read and seen reports in the international media alleging that many mosques in Myanmar have been locked and bolted, leaving Rohingya with nowhere to pray.

"Children were not also allowed to have an education and there were no job opportunities [available]," he claimed.

On Monday, the Philippines presidential palace said it is open to sheltering up to 3,000 "boat people" from Myanmar and Bangladesh.

Communications Secretary Herminio Coloma Jr also denied a newspaper report stating that the Philippines "will push back to sea" the boats.

In a statement, Coloma pointed out that the Philippines had signed the 1951 Convention Relating to the Status of Refugees.

"We shall continue to do our share in saving lives under existing and long-standing mechanisms pursuant to our commitments under the convention," Coloma said.

The Philippines' Department of Foreign Affairs, for its part, has not issued an official statement on the current refugee crisis.

Coloma's comment came as U.N. Secretary General Ban Ki-moon said that he was increasingly concerned about the situation.

Indonesia, Malaysia, and Thailand have sparked international outrage by turning away the vessels overloaded with the migrants.
Last Update: May 19, 2015 11:07 pm
RELATED TOPICS