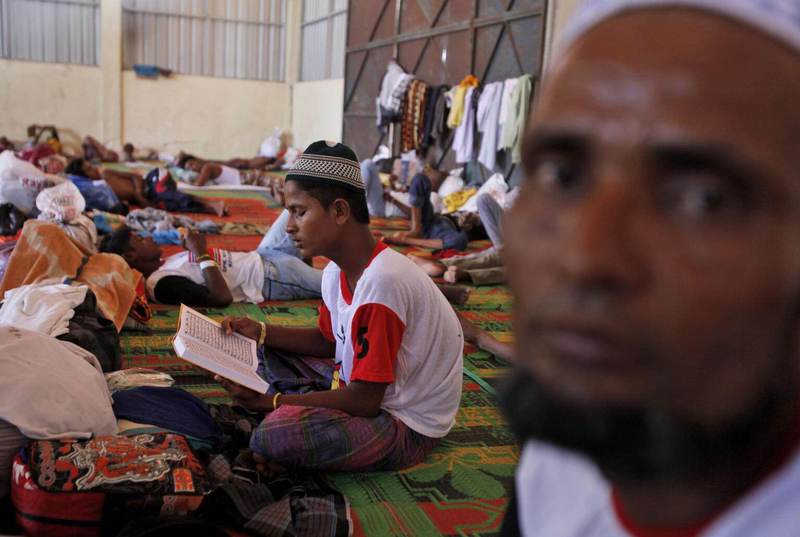 by Associated Press
May 20, 2015 12:00 am
More than 100 migrants stranded at sea for more than four months have been rescued and taken to Indonesia, the latest in a stream of Rohingya and Bangladeshi migrants to reach shore in a growing problem for Thailand, Malaysia and Indonesia.

"They were suffering dehydration, they are weak and starving," said Khairul Nove, head of Langsa Search and Rescue Agency in Aceh proivince. He said there were 26 women and 31 children among the 102 who were rescued.

One of the migrants, Ubaydul Haque, 30, said the ship's engine had failed and the captain fled, and that they were at sea for four months before Indonesian fishermen found them and took them to shore.

"We ran out of food, we wanted to enter Malaysia but we were not allowed," he said.

The rescue happened late Tuesday, just hours after Indonesia's foreign minister said the country had "given more than it should" to help hundreds of Rohingya and Bangladeshi migrants stranded on boats by human traffickers.

The foreign minister, Retno Marsudi, is to meet Wednesday with Malaysian and Thai officials and will discuss how to solve the migrant problem with help from their countries of origin, the U.N. refugee agency and the International Office for Migration.

"This irregular migration is not the problem of one or two nations. This is a regional problem which also happens in other places. This is also a global problem," Marsudi told reporters after a Cabinet meeting at the presidential palace.

Marsudi said Indonesia has sheltered 1,346 Rohingya and Bangladeshi migrants who washed onto Aceh and North Sumatra provinces last week. The first batch came on May 10 with 558 people on a boat, and the second with 807 on three boats landed on Friday. Even before the crisis, nearly 12,000 migrants were being sheltered in Indonesia awaiting resettlement, she said, with most of those Rohingya Muslims who have fled persecution in Buddhist-majority Myanmar. No more than 500 of those migrants are resettled in third countries each year, she said.

"Indonesia has given more than it should do as a non-member-state of the Refugee Convention of 1951," she said.

The crisis emerged this month as governments in the region began cracking down on human trafficking. Some captains of trafficking boats abandoned their vessels - and hundreds of migrants - at sea. About 3,000 of the migrants have reached land in Malaysia, Thailand and Indonesia, but all three countries have pushed some ships away. Aid groups estimate that thousands more migrants - who fled persecution in Myanmar and poverty in Bangladesh - are stranded in the Andaman Sea.

Myanmar's cooperation is seen as vital to solving the crisis, but its government has already cast doubt on whether it will attend a conference to be hosted by Thailand on May 29 that is to include 15 Asian nations affected by the emergency.An ethnic Rohingya man reads the Quran at a temporary shelter in Langsa, Aceh province, Indonesia, Tuesday, May 19, 2015. The country has sheltered more than 1,000 Rohingya and Bangladeshi migrants who washed onto Aceh and North Sumatra provinces last week.
Last Update: May 20, 2015 1:34 pm