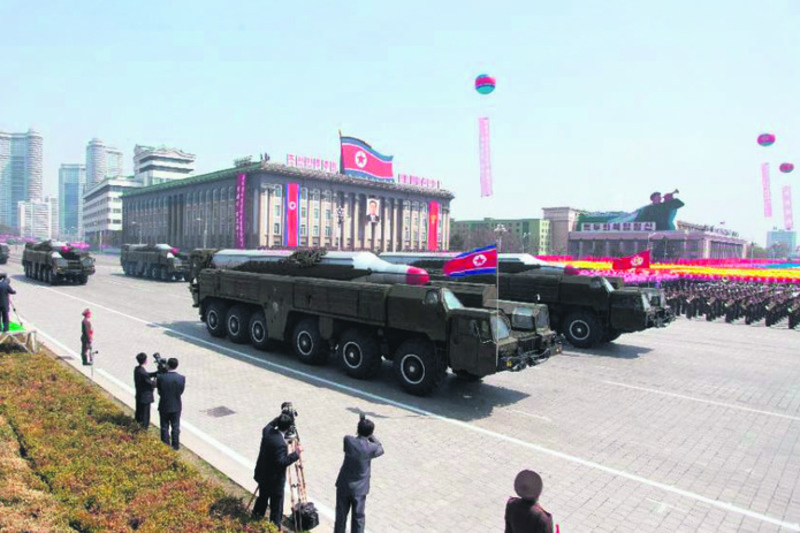 by May 20, 2015 12:00 am
North Korea said Wednesday it had perfected the technology to make nuclear warheads, not long after announcing it had launched a ballistic missile from a submarine, dramatically upping military brinkmanship with its U.S.-led foes. It also cancelled a visit by U.N. chief Ban Ki-moon after he accused it of fuelling regional tensions, in a week that also saw U.S. Secretary of State John Kerry condemn the North's "provocative, destabilizing and repressive actions." In violation of a U.N. ban, North Korea has long been testing long-range missiles. Nearly two weeks ago, the communist state said it had successfully test-fired a submarine-launched ballistic missile (SLBM). If confirmed, that would allow the deployment of nuclear weapons far beyond the Korean peninsula. But, experts say, the hardest part of delivering a nuclear strike is shrinking a warhead to fit a missile. Pyongyang's powerful National Defense Commission (NDC) said it now had the means to do just that, in an announcement certain to spark alarm not just in Washington, Seoul and Tokyo, but also in Beijing. "It has been a long time since we began miniaturizing and diversifying our means of nuclear strike," the NDC said in a statement on the North's official news agency. "We have also reached the stage where the highest accuracy rate is guaranteed, not only for short- and medium-range missiles but long-range missiles as well." Several analysts treated the SLBM claim with skepticism, and were cautious too about the miniaturization announcement. "There are differences between their statements and their actual operational reality," Daniel Pinkston, a senior researcher of the International Crisis Group, told AFP. "Some of it is bluster or exaggeration and maybe for internal audiences, and some of it is probably also for external audiences in an effort to test and to see if they can use systems for blackmail or coercion," he said.

Cho Han-Bum, an analyst at the Korea Institute for National Unification, said Pyongyang was "too cash-strapped" to perfect such intricate technology as miniaturizing a warhead. "I find the claim hard to believe," he said. Cho said North Korea's young leader Kim Jong-Un, who chairs the NDC, may be having trouble keeping the military under control following the reported execution of his defense minister. "So the latest NDC announcement appears to be aimed at assuaging hawks within the military and securing bargaining chips for negotiations with the other countries like the US by stoking their biggest fear, about the North's nuclear and long-range missiles."

Euan Graham, from Sydney's Lowy Institute for International Policy, said the comments were "North Korea's way... of trying to make sure they capture attention from a U.S. administration that's busy tackling crises elsewhere". However the top U.S. homeland security commander, Admiral William Gortney, said last month the North was capable of mounting a miniaturized warhead on its new KN-08 intercontinental missile. And South Korea's defense ministry has said the North appears to have achieved a "significant" level of technology to create a nuclear warhead. The NDC announcement came hours after Ban said his invitation to visit the Kaesong industrial zone inside North Korea had been cancelled without explanation. Had Thursday's visit gone ahead, Ban would have become the first U.N. secretary-general to set foot in the communist state for more than 20 years, since Boutros Boutros-Ghali in 1993. "This decision by Pyongyang is deeply regrettable," the U.N. chief, a former foreign minister of South Korea, told a forum in Seoul. "However, I as the secretary-general of the United Nations, will not spare any efforts to encourage the DPRK (North Korea) to work with the international community for peace and stability on the Korean peninsula and beyond." But Kerry, visiting Seoul on Monday, warned that North Korea was doing everything to spurn such reconciliation as he condemned Kim's "egregious" leadership and "grotesque" executions of top officials. "Instead, it continues to pursue nuclear weapons and ballistic missiles, it continues to break promises and make threats, and it continues to show flagrant disregard for international laws," he said. U.S. officials could not immediately be reached for comment on Wednesday's announcement.

The North has conducted three atomic tests and has long had nuclear weapons. But it was unclear whether it had the technology to deliver them by missile. The NDC said Wednesday that the SLBM test "represents a higher stage in our efforts to develop strategic striking forces." "The United States and its cronies must stop kicking up a ruckus over our measures to strengthen self-defense capabilities," it said.
Last Update: May 20, 2015 10:12 pm
RELATED TOPICS