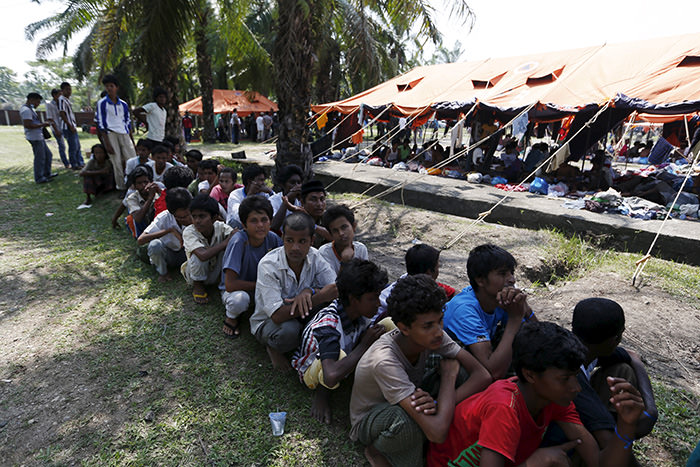 Rohingya migrants, who recently arrived in Indonesia by boat, queue up as they wait to have their identification recorded inside a temporary compound for refugees in Aceh Timur regency, Indonesia's Aceh Province May 21, 2015 (Reuters Photo)
by Daily Sabah with Wires May 21, 2015 12:00 am
Gambian government has expressed its willingness to help and offer possible resettlement for Rohingya Muslims from Arakan while Myanmar continues to deny their citizenship and forces them to migrate.

"It is sacred duty to help alleviate the untold hardships and sufferings these fellow human beings are confronted with" said the Gambian government in a statement released on May 19.

Expressing deep concern about regarding the migrants stranded at sea, Gambia called on Indonesia, Malaysia and Thailand to assist relocating the migrants to Gambian refugee camps. Gambia also urged "all countries with a conscience" to help provide migrants who are adrift with humanitarian aid, including tents, beds, blankets, medicine and food.

Its people having to live on 1.2 dollars a day, the tiny West African nation Gambia is governed by Yahya Jammeh who seized power in a 1994 military coup.

On the matter of the "resettlement" of Rohingya Muslims, US Department of State spokeswoman, Marie Harf, also said that the United States is prepared to provide humanitarian assistance to the vulnerable refugees. Speaking at the press conference held in Washington Harf stated that they were "prepared to take a leading role in any multi-country effort organized by the United Nations High Commissioner for Refugees (UNHCR)" for the resettlement of the migrants.

Talking about the abandoned Rohingya Muslims with Malaysia's Prime Minister Necip Tun Abdürrezzak, Turkey's President Recep Tayyip Erdoğan said that Turkey is ready to do its part and help deliver aid to the migrants.

Malaysian Foreign Minister, Anifah Aman, and his Indonesian counterpart Retno Marsudi has called for a meeting with Thailand to address the plight of the migrants, in addition to finally reaching an agreement to provide temporary shelter for the migrants on May 20. Since the announcement about 900 refugees have been rescued by Indonesia.

In addition to Gambia, Indonesia, Malaysia, Turkey and the US, a group of Filipino Muslims also announced on May 19 that they would gladly welcome Rohingya "boat people" if they were to land in the Philippines.

Most of Myanmar's 1.1 million Rohingya Muslims have been displaced and considered stateless. Myanmar has not granted any rights for its Muslim community and continues to violate their basic human rights through oppression. Almost 140,000 people out of its total 1.1 million Muslim community have been displaced as a result of clashes with ethnic Rakhine Buddhists in 2012.

Myanmar terms the long-persecuted Rohingya Muslim migrants as "Bengalis" and insists that they are illegal migrants from neighboring Bangladesh, despite the fact that most have lived in the country for generations.
Last Update: May 21, 2015 1:46 pm
RELATED TOPICS