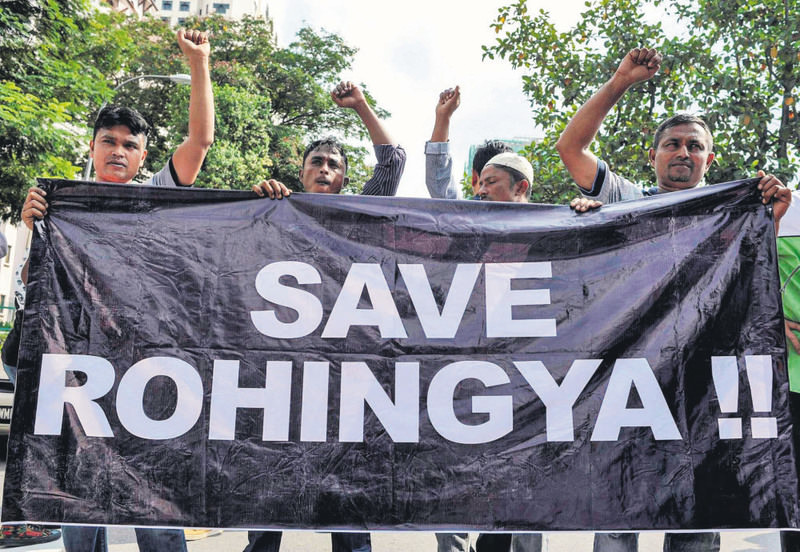 Ethnic Rohingya refugees from Myanmar residing in Malaysia hold a banner during a protest outside the Myanmar embassy in Kuala Lumpur on May 21, 2015.
by Daily Sabah May 21, 2015 12:00 am

As the EU draws up plans for military operations on Libyan shores targeting vessels used by human traffickers, Human Rights Watch (HRW) has called for naval operations to be compatible with human rights law

EU military action against human smuggling networks operating in Libya was commented on by an international human rights organization, saying that the operation needs to be compatible with human rights law and not risk migrant lives. Human Rights Watch (HRW) urged the EU to assess human rights implications of the military operation and to provide a "more effective long term solution than destroying boats."

"Smugglers and traffickers often show a complete disregard for human life and dignity, and they should be held to account for that, but military action against them could also expose migrants and asylum seekers to serious risks," said Judith Sunderland, acting deputy director of the Europe and Central Asia Division at HRW. "Saving lives at sea and bringing people at risk in the Mediterranean safely to EU shores should be the top priority."

"EU vessels participating in the planned naval operation are subject to the jurisdiction of the European Convention on Human Rights, which requires that all operations are designed, planned and implemented with full respect for rights, including the right to life, liberty and security, an effective remedy, and the prohibition of torture, including the prohibition of sending anyone to a country where they risk torture or cruel, inhumane or degrading treatment or threats to their lives or freedoms," HRW said.

As part of a comprehensive EU response to the Mediterranean migrant crisis, EU leaders agreed to launch a naval operation called EU NAVFOR Med on May 18, in order to destroy human smuggling networks in the Mediterranean Sea operating from Libya. The naval mission is expected to launch in June to fight the human traffickers behind the deluge of migrants and refugees attempting the dangerous crossing from crisis-hit Libya. The maritime operation aims primarily to protect European borders from the unprecedented influx of migrants attempting to reach the bloc's southern shores by paying smugglers to place them on overcrowded vessels and to prevent the loss of lives at sea.

Mediterranean Sea crossings continue to climb at an unprecedented level, hitting 38,690 since January 2015, according to figures released by the International Organization for Migration (IOM). The number of migrants arriving in Italy by sea in May reached more than 12,460. More than 5,000 people have died in the past 18 months while trying to make the dangerous crossing in dinghies and fishing boats. The number of dead or missing this year is about 1,800 compared with 3,500 during the whole of last year, the United Nations High Commissioner for Refugees has said.

Meanwhile, more than 900 migrants were rescued in one day from three overcrowded boats en route to Europe from North Africa, an Italian coast guard official said on Thursday. One body was recovered. Italy is bearing the brunt of the Mediterranean rescue operation while EU authorities press other member states to share the burden more fairly with a resettlement quota system for refugees.
Last Update: May 21, 2015 9:55 pm
RELATED TOPICS