Myanmar gov’t accepts attendance to migrant talks after diplomatic efforts from US, Asia 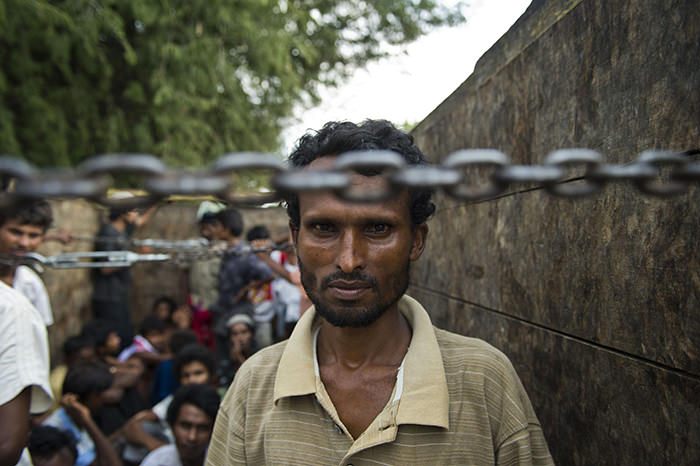 Hundreds of starving boatpeople were rescued off Indonesia on May 20 as Myanmar for the first time offered to help ease a regional migrant crisis blamed in part on its treatment of the ethnic Rohingya minority (AFP PHOTO)
by Daily Sabah May 21, 2015 12:00 am
Amid the Southeast Asian humanitarian catastrophe, Southeast Asian countries, along with the United States, have begun to increase the pressure on Myanmar to tackle the crisis that has resulted from the Myanmar government's discriminatory policies on Rohingya Muslims.

The urgent cooperation with Bangladesh to help migrants who are adrift and bettering the life conditions for Rohingya minority Muslims inside the country is required to prevent more deaths at sea. Regarding the Rohingya humanitarian crisis, a senior U.S. diplomat met with Myanmar President Thein Sein on Thursday, to discuss the urgency of the humanitarian situation. After a series of diplomatic visits by Malaysia and Indonesia foreign ministers to Myanmar, the Myanmar government decided to attend the migrant talks, which will take place on May 29 in Bangkok. The May 29 meeting will bring together more than a dozen governments from Southeast Asia and beyond to discuss the root causes of the crisis; the exodus of Rohingya Muslims from Myanmar as well as Bangladeshi migrants.

The Indonesian and Malaysian governments are offering shelter to migrants for up to a year, a move welcomed by international human rights organizations. The joint decision on refugee boats was seen as a positive sign to solve the Rohingya migrant crisis. Although far from adequate, it risks undermining the international protection system, Amnesty International said.

"This is certainly good news for the people aboard those boats that manage to reach the safety of the shore – but it does nothing for the thousands still adrift at sea, with diminishing supplies of food and water, or for any more who may follow them," said Richard Bennett, Amnesty International's Asia-Pacific Director. "Indonesia, Thailand and Malaysia cannot shirk their duty as a state's party to the U.N. Convention on the Law of the Sea to provide maritime search and rescue operations to save lives." Providing temporary shelter for up to 7,000 people stranded at sea was considered as a "first step, and is better than no protection at all." "People claiming asylum must be able to access refugee status determination procedures, in safety and in dignity. Refugees and vulnerable migrants must not be criminalized for irregular entry, nor can they be returned to countries where their life or rights are at risk."

Despite Amnesty's call on the migrant crisis, Australian Prime Minister Tony Abbot refused to take in any of the thousands of Rohingya Muslims fleeing persecution in Myanmar and the Bangladeshis landing on the shores of Southeast Asian countries. "We are not going to do anything that will encourage people to get on boats. If we do the slightest thing to encourage people to get on the boats, this problem will get worse, not better," the Australian prime minister said.

According to Bay of Bengal crossing statistics released by the International Organization for Migration (IOM), the total confirmed number of migrants that landed since May 4 hit 3,200. Reportedly, 1,395 of them landed in Indonesia and 1,158 in Malaysia. It is estimated that around 4,000 migrants from Bangladesh and Myanmar are still at sea waiting to be rescued. More than 88,000 people have attempted the dangerous sea crossing to the Bay of Bengal and Andaman Sea since 2014.
Last Update: May 21, 2015 4:26 pm
RELATED TOPICS