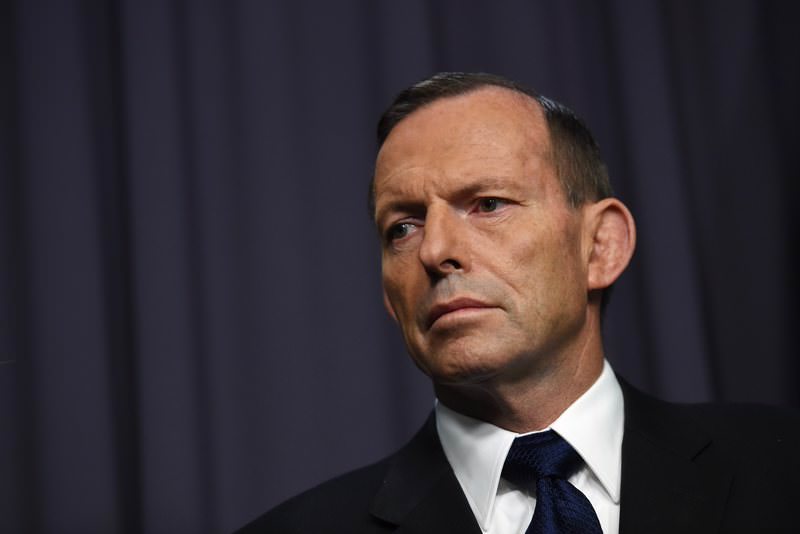 by Anadolu Agency May 21, 2015 12:00 am
Australia has ruled out offering to resettle Muslim Rohingya and Bangladeshi migrants-thousands of whom are stranded on the Andaman Sea -- as Southeast Asian countries discuss the crisis.

"Nope, nope, nope," Prime Minister Tony Abbott told reporters Thursday, insisting that people seeking a new life need to "come through the front door, not through the back door."

"Australia will do absolutely nothing that gives any encouragement to anyone to think that they can get on a boat, that they can work with people smugglers to start a new life," new broadcaster ABC quoted him as saying. "Our role is to make it absolutely crystal clear that if you get on a leaky boat, you aren't going to get what you want."

Abbott's comments come a day after Malaysia and Indonesia-where thousands of migrants have been washing ashore -- agreed to offer temporary shelter to the around 7,000 stranded Rohingya and Bangladeshis - but only if the international community agrees to then resettle them after one year.

On Thursday, Malaysian Foreign Minister Anifah Aman traveled to Myanmar-where most of the Rohingya are thought to originate -- to discuss the offer, while also pressuring the Myanmar government to solve ongoing problems between its Muslim and Buddhist communities. Arrmanata Nasir, Indonesian foreign ministry spokesman, confirmed to Anadolu Agency that Minister Retno Marsudi would accompany Aman.

"We want to be a good neighbor to our friends and partners, and obviously if we are asked to help, we are happy to do so," Abbott said Thursday.

"The culprit is Burma [Myanmar] because it is Burma where there is an issue," he said.

Abbott's reaction has drawn criticism for opposition politicians including Labor Party leader Bill Shorten, who said the "'not my problem' approach is disappointing'" amid an "unfolding humanitarian crisis in Southeast Asia," according to Sky News.

"Just for our prime minister to say `nope' is very narrow-minded and fairly arrogant," he added.

Indonesia's Foreign Ministry responded to Abbott's comments by saying Canberra was not in a position to ignore the crisis.

"My point is this: countries that are parties to the convention on refugees have a responsibility to ensure they believe in what they sign," the Sydney Morning Herald quoted spokesman Arrmanatha Nasir as saying.

Indonesia, Malaysia and Thailand-after whose crackdown on trafficking boatloads of the migrants began turning up on the three countries' shores -- are not signatories to the 1951 United Nations Refugee Convention that would oblige them to resettle a certain number of refugees.

The U.S., the Philippines and Gambia have offered to accept some Rohingya, while Turkey announced it would donate $1 million to support aid activities.

The Gambian presidency has released a statement saying: "As human beings, more so fellow Muslims, it is sacred duty to help alleviate the untold hardships and sufferings these fellow human beings are confronted with."

Meanwhile, the U.S. State Department said Washington is "prepared to take a leading role" in the multi-country resettlement effort led by the UN's refugee agency.

The U.S. has so far resettled more than 1,000 Rohingya refugees during the current fiscal year that began Oct. 1 and provided nearly $109 million in humanitarian aid during that time, according to spokeswoman Marie Harf.

"The U.S. stands ready to help the countries of the region bear the burden and save lives today," she said. "We have a common obligation to answer the call of these migrants who have risked their lives at sea."

On May 29, Thailand will host talks on the migrant crisis with senior officials from "15 affected countries" -- primarily Myanmar, Bangladesh, Malaysia, Indonesia and Australia, who will send its ambassador for people-smuggling issues, Andrew Goledzinowski.

Abbott's government was elected in 2013 after pledging to "stop the boats," and Australia has a policy of using offshore detention centers in Nauru and Papua New Guinea to process asylum seekers who arrive by sea on boats.

Last September, it signed a $35-million bilateral agreement with Cambodia to resettle only genuine refugees who volunteer in the Southeast Asian country.

The signing of the deal between Australia's then immigration minister, Scott Morrison, and Cambodian Interior Minister Sar Kheng in Phnom Penh had been met with widespread criticism. Refugee advocacy groups said Australia was shirking its obligations to the U.N. refugee convention by passing off vulnerable people to one of the most corrupt countries in the world.
Last Update: May 21, 2015 8:09 pm
RELATED TOPICS