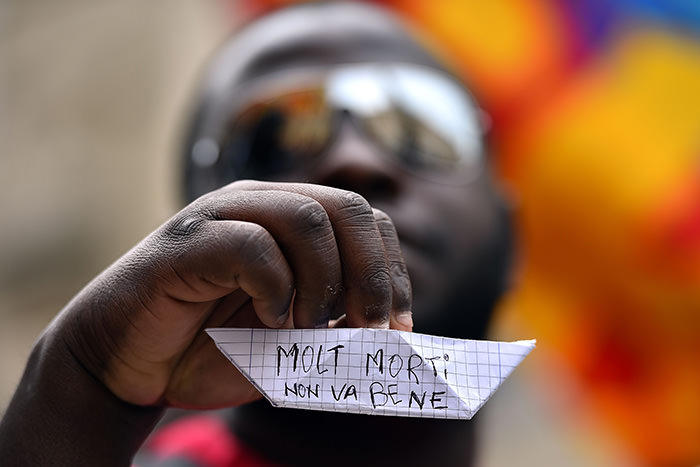 An asylum seekers holds a paper boat, with words written in Italian that read, ,Too many deaths, it is not good, during a demonstration in front of the Italian parliament in Rome, on April 23, 2015 (AFP Photo)
by May 21, 2015 12:00 am
Surging numbers of migrants risking their lives on rickety boats both in Southeast Asia and on the way to Europe are a test of the world's humanity, the Red Cross chief told Agence France-Presse in an interview.

"The tolerance, the generosity, the openness, the solidarity of the world will be tested," said Elhadj As Sy, the head of the International Federation of Red Cross and Red Crescent Societies (IFRC).

"Simply put, our humanity will be tested. The question is will we pass the test?" he told AFP in his office in Geneva this week after a visit to Asia where he took part in a summit on migration.

Nearly 3,000 migrants have swum to shore or been rescued off Malaysia, Indonesia and Thailand over the past 10 days after a Thai crackdown on human trafficking threw the illicit trade into chaos, with some of the syndicates involved abandoning their helpless human cargo at sea.

Malaysia on Thursday ordered search and rescue missions for the thousands more believed to be stranded at sea, in the first proactive official move in the region aimed at saving the boatpeople. Malaysia and Indonesia have said they will end a much-condemned policy of turning away boatloads of starving Muslim Rohingyas fleeing Myanmar and economic migrants from Bangladesh. "We are pleased to witness that so many people from Myanmar and Bangladesh are being hosted … while longer term solutions to this problem are being found," Sy said, adding that next time "we hope it will not take so long for that to happen."

"The hygienic conditions on such boats are horrible. … Women get abused … children witness horrific things that they should never see in their entire lives. And you know men are reduced to their minimum, unable to defend their families," Sy said.

Red Cross and Red Crescent workers were doing their best to help, providing food, water and shelter, but also just extending "a friendly hand" to help people to "recover some sense of humanity and dignity," he said. Sy added it was paramount to address "the situations that are really pushing people out," like the Myanmar government's treatment of its Rohingya minority.

The migrant crisis in Southeast Asia has ballooned at a time when Europe is also reeling from a flood of migrants risking their lives on the Mediterranean to reach its shores. While acknowledging that "all the criminal activities around people that would exacerbate their vulnerabilities and their risks [must] of course be handled," Sy stressed, and that in both Southeast Asia and Europe the main focus should be on saving lives.

"We are not in the business of destroying boats, but we are in the business of how we can care for the migrants," he said. He called for known migrant routes to be "secured" with search and rescue teams and for destination countries to have apparatuses in place to care for them when they arrive. "Our expectation is that [they] show more generosity and humanity," he said.

When asked about a controversial plan for European country quotas for refugees who cross the Mediterranean, he said: "There is a humanitarian imperative to care for people who are searching for peace, who are searching for better conditions … and nothing less is expected from Europe." In the long term, he said, countries need to open up legal and safe means of migration, "so that the room for traffickers and smugglers gets more and more reduced."
Last Update: May 21, 2015 3:45 pm
RELATED TOPICS