Reasons behind Rohingya migrant crisis remain to be addressed 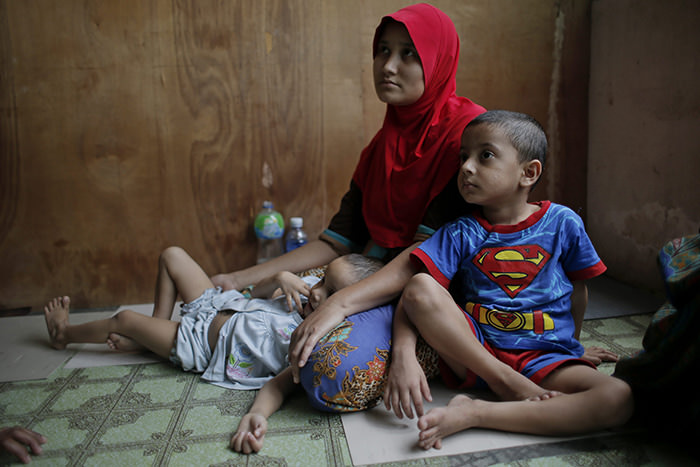 Ethnic Muslim Rohingya child, Mobinakhatu (R) and his family in their community meeting house in Kuala Lumpur, 19 May 2015 (EPA Photo)
by Anadolu Agency May 23, 2015 12:00 am
A decision by Indonesia and Malaysia to offer temporary shelter to thousands of migrants stranded at sea appears to have eased a deteriorating humanitarian crisis, but some say a short-term solution to the problem may turn into bigger problems and tragedies.

Concerns grow mainly around the lack of meaningful action taken to address the "root cause," which has become synonymous with the country from where many of these migrants flee.

Myanmar has been under pressure to help stem the flood of migrants - many of whom are Rohingya Muslims - who have been attempting to land on Malaysian, Thai, and Indonesian shores following Thailand's efforts to clamp down on smuggling rings in its south.

Rohingya - who the United Nations consider to be the world's most persecuted ethnic minority - have fled the predominantly Buddhist country in droves since 2012, in fear of violence that some human rights groups consider to be state-sponsored.

According to Wakar Uddin, who directs of U.S.-based Arakan Rohingya Union, humanitarian efforts by the international community are a short term approach, albeit important.

"Without addressing the root cause of the problem, it will only add to the misery of the Rohingya people," he told Anadolu Agency.

An estimated 1,700 Rohingya and Bangladeshi migrants have landed in Indonesia and another 1,100 in Malaysia since the crisis began in early May, according to the UN.

Officials from both countries have since clarified that they would shelter Rohingya for one year, while the Bangladeshis would be returned to their country. A number of countries, including Turkey and the U.S., have also come forward to join efforts to help.

Uddin, however, warned that current rescue efforts could trigger subsequent flows of more Rohingya boat people from Myanmar to the Andaman Sea.

"I think that the international community should be well prepared for this possible dramatic rise," he said.

He added that Rohingya prefer the issue being resolved through diplomacy and dialogue, but "if that does not work, then the strategy should be shifted toward international jurisprudence at the International Criminal Court, International Court of Justice, and the UN Security Council.

"There should be reinstatement and widening of sanctions against the Myanmar, and blacklisting the criminal perpetrators and masterminds in Myanmar including those from Rakhine Nationalist Party, the responsible senior officials in the central government, and those radical monks preaching hate just to commit violence against Rohingya."

After violent clashes with local nationalist Buddhists in the summer of 2012, tens of thousands of Rohingya joined an exodus from Myanmar's Rakhine state toward Malaysia, Indonesia and Australia, sparking what has now been called the region's largest exodus of boat people since the Vietnam War.

Anti-Muslim violence across Myanmar has since killed hundreds, blighting the country's shift from military dictatorship to a more open and democratic society.

Myanmar, also known as Burma, does not recognize the Rohingya, preferring to refer to them as Bengali, which suggests they are from neighboring Bangladesh.

According to Brianna Oliver, director of communications at U.S. Campaign for Burma, humanitarian efforts to rescue those currently stranded at sea is only one of the necessary steps needed to help the Rohingya.

"Unfortunately, the United States has lifted nearly all of its sanctions on Burma, which in turn has removed the ability to leverage effective pressure for legitimate democratic reforms," she told Anadolu Agency.

"The U.S. should deny Burma admittance into the Generalized System of Preferences trade program and add those most responsible in the Burmese government for the persecution of the Rohingya to the Specially Designated Nationals list, as well as demand the government to end its ethnic cleansing of the Rohingya."

She warned that the Rohingya would face "genocide" as long as the Myanmar government continues its "policies of persecution" and "ethnic cleansing."

On Thursday, Myanmar said it will attend a June 29 meeting in Thailand to address the region's growing migrant crisis.

The attendance had been in doubt, despite growing diplomatic pressure.
Last Update: May 23, 2015 10:03 am
RELATED TOPICS