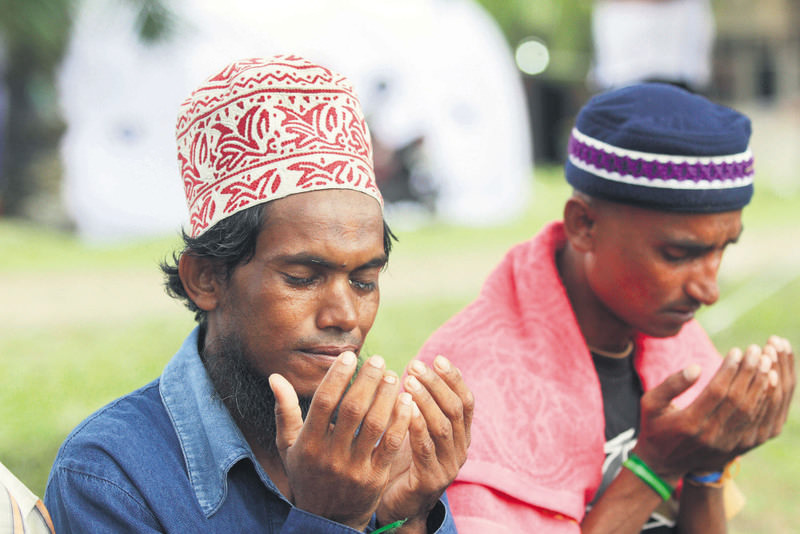 Two Rohingya Muslims pray at a religious ceremony held in Myanmar to pray for the Rohingyas stranded at sea.
by Cihangir Yıldırım May 24, 2015 12:00 am

Rohingya Muslims, who are rising on the world's agenda for being stranded at sea while trying to flee from Myanmar, have a long history of suppression by the Myanmar government, and is the most persecuted ethnic minority in the world

The Rohingyas are a Muslim ethnic group living mainly in Myanmar. Rohingyas are thought to be descended from Muslim traders who settled there more than 1,000 years ago. As of 2015, approximately 800,000 Rohingyas live in Myanmar. About 300,000 live in Bangladesh. Myanmar denies them citizenship, freedom to travel, access to education and they face systematic persecution by the Buddhist majority. Rohingyas are not recognized among the 134 official ethnicities of Myanmar because authorities see them as illegal immigrants from neighboring Bangladesh. They are subjected to forced labor, have no land rights and are heavily restricted under the Burmese dictatorship. They have no permission to leave the camps built for them, have no source of income and have to rely on the World Food Program to survive. In Bangladesh many are also desperately poor, with no documents or job prospects. The U.N. considers Rohingyas to be one of the most persecuted minorities in the world.

In the past three years, more than 120,000 have tried to escape Myanmar by sea. But neighboring countries don't want them. Thousands have tried to reach Buddhist-majority Thailand. But the Thai navy has turned them away. Its navy says that it has given aid to migrants in its waters and has indicated it may allow refugee camps on it shores. But it is turning away and does not want permanent settlers. Many more have tried to reach Muslim-majority Malaysia and Indonesia. According to the U.N. refugee agency, Malaysia, which is not a signatory of international conventions on refugees, is host to more than 150,000 refugees and asylum seekers. The majority of those immigrants are from Myanmar, and more than 45,000 are Rohingyas. But still turns away Rohingyas in boats, citing "social unrest" if they are let in. Indonesia has also warned of "an uncontrolled influx." Bangladesh sometimes allows them to live in camps on its southeastern border and sometimes sends them back to Myanmar. It is estimated there are currently about 200,000 Rohingyas living in refugee camps, many in squalid conditions. All this has led to around 8,000 migrants being stranded at sea. Human Rights Watch (HRW) calls it a deadly game of "human Ping-Pong."

International human rights groups and the U.N. Refugee Agency last week called on Thailand, Malaysia and Indonesia to not push away migrants' boats from their shores. Malaysia launched high-level talks with its neighbors in an effort to solve the migrant crisis. Malaysia and regional countries asked Myanmar to participate in finding a solution. But Myanmar denied the allegations. "We are not ignoring the migrant problem, but we will not accept the allegations by some that Myanmar is the source of the problem," Zaw Htay, director of the office of Myanmar's president said. Indonesia and Malaysia agreed to continue to provide humanitarian assistance to some 7,000 migrants still at sea. They also agreed to offer temporary shelter provided that the resettlement and repatriation process will be done in one year by the international community. "Irregular migration is not the problem of one or two nations, this is a regional problem, also a global problem. Indonesia has sheltered 1,346 Rohingya and Bangladeshi migrants in a recent crisis. Even before the crisis, about 12,000 migrants were sheltered in Indonesia awaiting resettlement. No more than 500 of those migrants are resettled in third countries each year," Indonesian Foreign Minister Retno Marsudi told. The Myanmar government accepts attending migrant talks after the diplomatic efforts from Southeast Asian countries and the U.S. According to the International Organization for Migration (IOM), the total number of migrants confirmed landed since May 4 hit 3,200. Reportedly 1,395 of them landed in Indonesia and 1,158 in Malaysia. Around 4,000 migrants are still at sea awaiting rescue. The U.S. is willing to take Rohingya refugees as part of international efforts to cope with stranded boat people, Spokeswoman Maria Harf said. Also Prime Minister Ahmet Davutoğlu announced that the Turkish navy ship was dispatched to the coast off Thailand and Malaysia where thousands of Rohingya Muslim were stranded at sea. Turkish President Recep Tayyip Erdoğan also pledged to provide $1 million dollars in humanitarian aid to UNHCR and IOM. Gambia and the Philippines have expressed their willingness to help and offer possible resettlement for Rohingya Muslims from Arakan while Myanmar continues to deny them citizenship and forces them to migrate.

According to the U.N. Refugee Agency, in the past three years, over 120,000 Rohingyas have boarded ships to flee abroad. Some 25,000 migrants left Myanmar and Bangladesh in the first quarter of 2015. Between 40-60 percent of the 25,000 are thought to originate from Myanmar's western state of Rakhine. The unrest in Myanmar sparked in 2012 cost many Muslims their lives, about 140,000 stateless Rohingyas were placed in internal displacement camps due to the increasing violent attacks on them. According to IOM and the non-profit Arakan Project, as many as 8,000 migrants from Bangladesh and Myanmar are believed to be stranded in the Andaman sea. More than 2,000 migrants have landed on Malaysian and Indonesian shores over the last few days, after the Thai officials launched crackdown. More than 88,000 people have attempted the dangerous sea crossing to the Bay of Bengal and Andaman Sea since 2014. According to the U.N., some 920 mostly Rohingyas died between September and March in the Bay of Bengal.
Last Update: May 24, 2015 9:17 pm
RELATED TOPICS