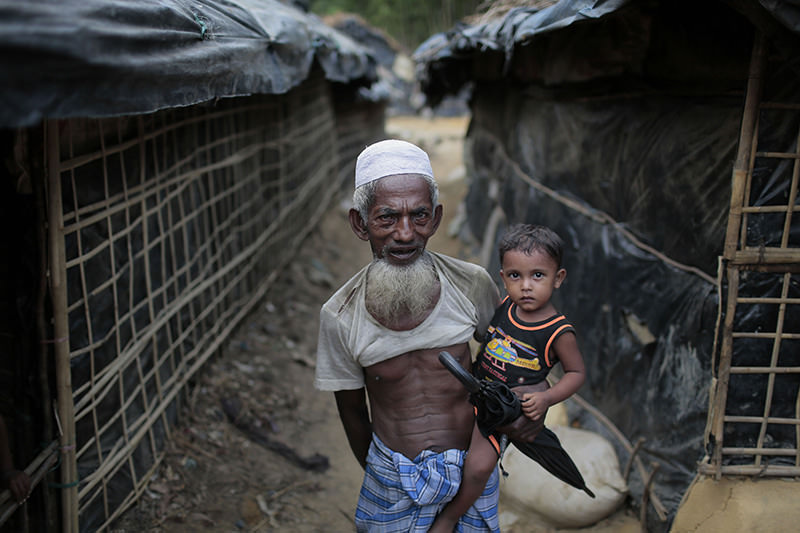 An elderly Rohingya Muslim man carries his grandson as they walk in an alley at a camp for Rohingya people in Ukhiya, near Cox's Bazar, 296 kilometers (183 miles) south of Dhaka, Bangladesh (AP Photo)
by Daily Sabah with AFP May 27, 2015 12:00 am
Bangladesh plans to relocate thousands of Rohingya who have spent years in refugee camps near the Myanmar border to a southern island, an official said Wednesday.

The government has started planning the relocation to Hatiya island in the Bay of Bengal, a move backed by Bangladesh Prime Minister Sheikh Hasina, the head of the government's Myanmar Refugee Cell Amit Kumar Baul said.

"The relocation of the Rohingya camps will definitely take place. So far informal steps have been taken according to the PM's directives," Baul told AFP.

Bangladesh is sheltering about 30,000 Rohingya refugees in two official camps in the southeastern district of Cox's Bazar which borders Myanmar. The official refugee camps are assisted by international organizations as well as NGOs, whereas about 200,000 unregistered Rohingyas reside in villages with no legal protection or humanitarian assistance.

The Rohingya ethnic minority of Burma is one of the largest stateless groups in the world. They have faced sustained persecution in Myanmar since at least the 1940s. Many were stripped of their citizenship by the Myanmar government in 1982 following continuous violent military campaigns, as a result of which thousands fled abroad, to mainly neighbouring Bangladesh. The number of refugees in Bangladesh recently increased to alarming levels, after a clash between Muslim Rohingyas and ethnic Rakhine Buddhists erupted in June 2012 in Myanmar.

A Rohingya leader said Bangladesh's latest plan to relocate thousands of Rohingyas to an island would only make life worse for the refugees, many of whom have been languishing in the camps for years.

"We want the (Bangladesh) government and international organisations to resolve our issue from here," Mohammad Islam, a community leader in one of the camps, told AFP.

The Bangladesh government official Baul said, the move was partly prompted by concerns the camps were holding back tourism in Cox's Bazar, where locals flock to beach hotels and resorts.