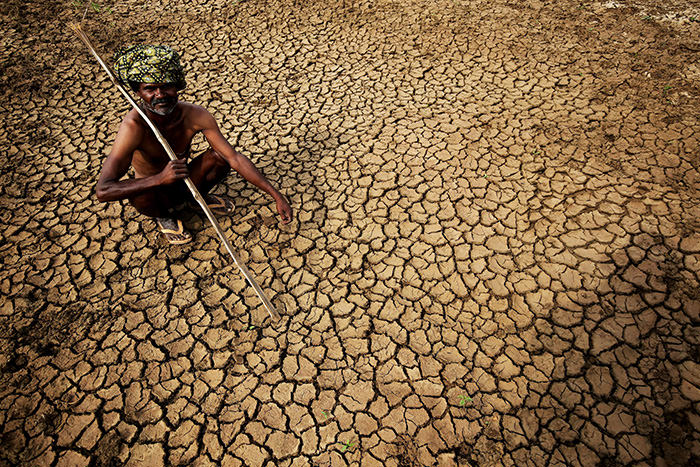 An Indian farmer sits in his dried up land in gauribidanur village, doddaballapur district, which is very close to Karnataka and Andhra Pradesh border around 85km from Bangalore, Indian, 26 May 2015 (EPA Photo)
by May 27, 2015 12:00 am
More than 1,150 people are dead from a heatwave sweeping across south India with more fatalities being reported due to the heat, officials said on Wednesday.

Andhra Pradesh state was the worst hit, where 884 people had died of heatstroke since May 18.

Of the total fatalities in Andhra Pradesh, 668 deaths were reported between Saturday and Monday, a period when the mercury peaked at 48 degrees Celsius in certain areas, officials at the state's disaster control room said.

Another 269 people had died in the neighbouring state of Telangana since April 15, state disaster management chief Bhambal Ram Meena said.

Most of the victims of the heat were homeless, elderly or construction workers.

The Indian Meterological Department has predicted a brief respite from Thursday with rain and thundershowers in some parts of the states.

But another hot spell would likely follow since it would be weeks before the monsoon season arrives in the region.

Weather officials said northwesterly dry and hot winds from the desert state of Rajasthan were responsible.

The northern, central and eastern parts of India were also reeling under the intense summer heat.