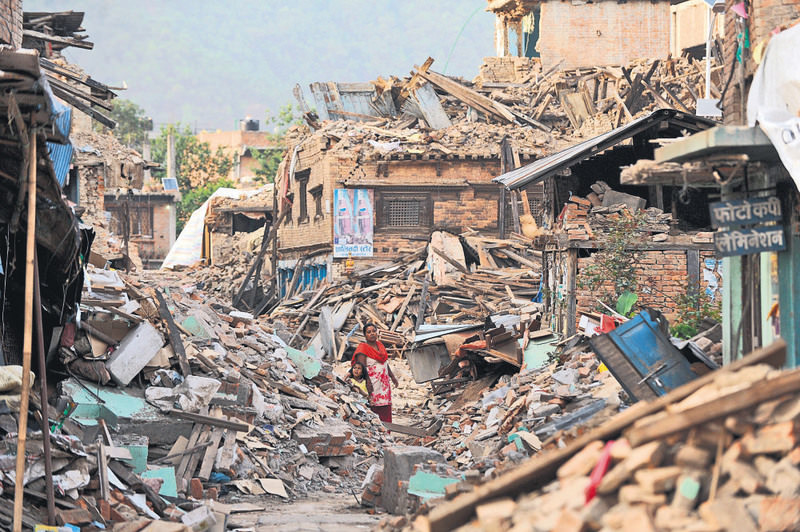 by Anadolu Agency May 27, 2015 12:00 am
The devastatIon caused by the April 25 earthquake and the following tremor on May 12 continues to exact a high price in Nepal, where over half-a-million buildings were destroyed. With the slow pace of the rebuilding process underlining the need for international help, ordinary people are trying to live day-to-day surrounded by ruins.

A five-story building still stands tall and imposing in the Dharmasthali neighborhood on the northern edge of Kathmandu, Nepal's capital, despite the earthquakes that wreaked havoc a month ago. The smell of chicken droppings wafts from a crumbling brick structure next door to where a family ran an eatery on the building's ground floor. A closer look inside reveals cracks and fractures, a sight that has become increasingly common as homeowners and volunteer engineers take stock of Nepal's devastating temblors. Lal Bahadur Shrestha, a landlord and poultry farmer, invested 8.5 million rupees ($83,400) in the building – a huge amount for the head of a family of six, including two adult sons and daughters. The 52-year-old trusted his relative, a contractor, for the building and had the design approved by an overseer at Dharmasthali's village development committee who never supervised the construction. The contractor persuaded Shrestha to construct the building's foundations only five feet deep, telling him that it was strong enough to support the five stories. The two powerful earthquakes that struck Nepal within two weeks proved false such assumptions, and exposed the fact that building codes have largely been unenforced. Experts say a cabal of corrupt government officials, rapacious landlords and crafty contractors using poor construction materials share the blame. "Ours is a country where contractors regard themselves as engineers and landlords disregard safety standards," Pramod Neupane, a structural engineer, said. "All they want is to build a house in Kathmandu and earn money through rents. They don't want to assess the soil before building their multi-story buildings." Neupane, who holds a master's degree in earthquake-resistant structures from a British university, told Anadolu Agency (AA): "The landlords ignore building codes. They think that the designs prepared by an overseer who is not an expert on the subject are all that's needed for a house to be strong." Neupane claims that the sector also suffers from poor-quality building materials including sub-standard cement, rods and sand. "Even our workmanship is very poor. We don't have a trained or skilled labor force. Everything is done on an ad hoc basis," he said.

When Nepal introduced building codes in 1994, the vast majority of the Nepalese lived in rural regions. A decade later, hastened by a Maoist insurgency, people migrated to the country's cities and towns, including Kathmandu, taking advantage of its relative safety. In 2004, the government set up a Department of Urban Planning and Building and attempted to enforce building codes. "We have solid rules and regulations, but again, the problem is with implementation," Neupane said. Where government bureaucracy remained largely dysfunctional after the quake, it was young and self-motivated people like Neupane who filled the void.

Bipin Gaire, a 28-year-old civil engineer was one of hundreds of young people who responded to the quake by setting up a volunteer group. It had been two days since the quake last month and Gaire was restless under a tent outside his home on the outskirts of Kathmandu. For the last four years he had been running a firm that provided advanced training to engineers. "I asked myself how I can contribute to society in this period of crisis. People had abandoned their homes and were living like refugees. I realized that they were suffering from mental trauma. I toyed with the idea of advising them on the state of their damaged homes," he said. Thus was born Bhukampa.net, a website whose means "earthquake" in Nepalese and serves as a platform for homeowners and tenants to request a structural assessment of their dwellings.

It took him and his web developer a mere 24 hours to set up the website and create the software. The system allows engineers to sign up for voluntary work and applicants can file an online request seeking an onsite inspection. "We also receive requests through phone calls and SMS. We cannot travel beyond the Kathmandu Valley because we don't have vehicles. For users from outside the valley, we request they send photographs of their houses," Gaire told AA.

A gregarious man, Gaire quickly roped in his engineer friends, including Neupane.

While the volunteer group boasts more than 350 engineers, roughly 20 members fan out from their office in Pulchok, riding motorbikes for hours to assess the damage to houses. "We have already inspected more than 4,000 buildings," Gaire said. Neupane said he was moved by the generosity of the applicants who bivouacked fearing more quakes, but often offered drinks and snacks.

More than 500,000 government and private buildings and houses have collapsed and 270,372 were severely damaged across the country, by the quake according to the state-run Nepal Disaster Risk Reduction Portal. In the Kathmandu Valley, where 10 percent of Nepal's 26 million people live, out of a total of 614,777 houses and buildings, 72,222 have been fully destroyed and 65,694 are partially damaged. At Dharmasthali, Gaire, a white helmet perched on his head, investigates the cracks on the back of Shrestha's home as if he were a doctor were examining an X-ray image. "The ground floor cannot withstand the top-heavy building's weight," he told Shrestha. "So you have two options; you either demolish the two upper stories or rebuild the damaged parts." "But for now, please provide temporary support for the damaged wall," he said. Shrestha nodded in agreement and flashed a rare smile.
Last Update: May 28, 2015 11:22 pm
RELATED TOPICS