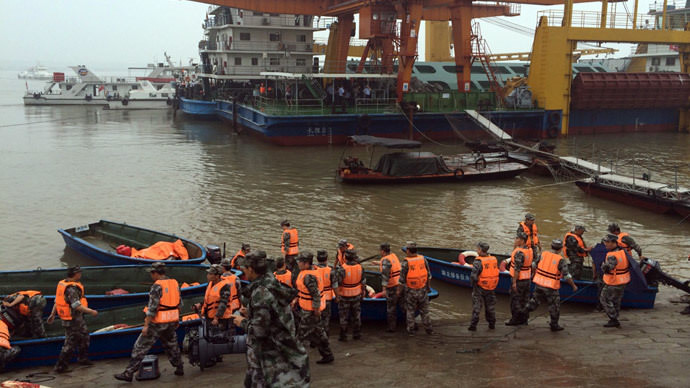 by Jun 02, 2015 12:00 am
A small cruise ship carrying more than 450 people sank overnight in the Yangtze River during a storm in southern China. The Eastern Star capsized in a storm late on Monday, state media said, with those on board ranging in age from three to more than 80. Six bodies have been found and over a dozen people rescued, but more than 430 are still unaccounted for.

"As compared to the large volumes of passengers transported in (China's) coastal areas and inland waterways, I don't think there exists a very serious problem with regards to safety," said James Hu, a professor at Shanghai Maritime University.

"I've met with Korean and Japanese experts and our conclusion has been that China's laws with regards to passenger ships and their enforcement is the strictest," he said, adding that this ranged from vessel construction standards, to age restrictions on passenger ships to crew qualifications.

In recent years, the Maritime Safety Administration had also become more strict on safety precautions, especially in areas like Bohai Bay in northeast China, where it would prevent ships from sailing once winds became too strong, he said.

To be sure, China has poor workplace safety record - a poultry slaughterhouse fire in 2013 killed 120 people for example - and tens of thousands die on the roads each year.

But according to the Changjiang Maritime Safety Administration, responsible for a third of the Yangtze, there were just 16 cases of incidents involving ships last year which left 32 people missing or dead. The regulator oversees the passage of around 60,000 ships each year.

In the worst previous incident of its kind in China, the steamship Kiangya blew up on the Huangpu river in southeast China in 1948, killing more than 1,000 people.

More recently, 280 people died in 1999 after a ferry caught fire and capsized in the Yellow Sea close to the port city of Yantai in Shandong province. Other accidents have mostly involved fatalities in the low double- to single-digits, according to past local media coverage.

The Eastern Star passed inspections by the authorities in the central province of Chongqing last month before it sailed for Nanjing, the capital of Jiangsu province that is near Shanghai, unnamed officials at the Nanjing Maritime Bureau told the People's Daily. It was not checked at the Nanjing port as such ships tended to receive safety inspections every three months.

When it capsized, it was about midway on an 11-day cruise from Nanjing to Chongqing, winding upstream with stops at scenic and historic sites. The ship was owned by the Chongqing Eastern Shipping Corporation, a state-owned company which runs tours along the Three Gorges section of the Yangtze.