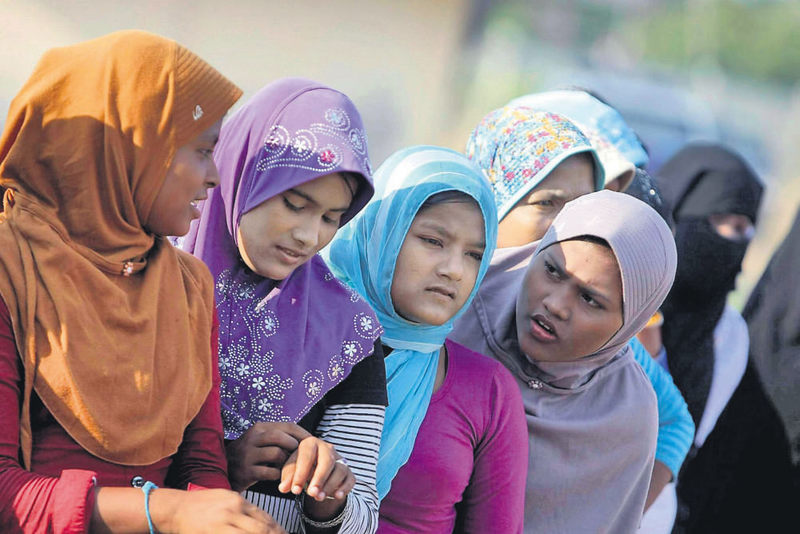 Rohingya refugee women line up for breakfast at their temporary camp in Kuala Cangkoi, North Aceh, Indonesia, June 2.
by Daily Sabah with Wires Jun 02, 2015 12:00 am

Tragedy continues for Rohingya women in the Thailand-Malaysia border camps used by human smugglers as they are reportedly subjected to systematic repression, sexual assault and other violations

As the migrant tragedy grows in Southeast Asia, Muslim women from the Rohingya ethnic minority who were held at human-trafficking camps in Thailand and Malaysia have been subjected to grave human rights violations, according to a report released by Malaysian state-run Burnama news agency. Many Rohingyas have been subjected to sexual assaults by smugglers as well as violence in the camps, the report said, documenting the continuing tragedy for Rohingyas not only in Myanmar, but in the countries where they desperately seek refuge.

The report quoted a Rohingya survivor of the camps, Nur Khaidha Abdul Shukur, as saying young women would be taken away nightly from the jungle post where she was held near Padang Besar in Thailand. She passed through the camp last year, according to the report released late Monday. "Every night, two or three young, pretty Rohingya women were taken out from the detention pens by the guards to a clandestine place," she was quoted as saying. "They would be gang raped by the guards. Two young women at the camp became pregnant after being gang raped."

The refugee camps are believed to have been used by human smugglers who move large numbers of impoverished Rohingyas out of Myanmar where they face systematic repression.

Meanwhile, U.S. President Barack Obama has urged Myanmar to end discrimination against its ethnic Rohingya minority if it wants to succeed in its democratic transition from decades of military rule. "The Rohingya have been discriminated against significantly, and that's part of the reason they're fleeing," Obama said Monday in Washington at an event with young leaders from Southeast Asia. "I think if I were a Rohingya, I would want to stay where I was born. But I'd want to make sure that my government was protecting me and that people were treating me fairly," he added. "And that's why it's so important, I think, as part of the democratic transition, to take very seriously this issue of how the Rohingya are treated."

Rohingyas, who are Muslim, have long been subjected to severe discrimination and violence under the rule of dictatorship. The violent surge of Buddhist nationalism against minority Muslim communities in the Rakhine state of Myanmar has made them victims of political and religious extremism. The plight of the group, 1.3 million of whom live in western Myanmar, is that they suffer from statelessness as the government denies them citizenship. As the community is not living under any protection of the state, their living conditions are worsening and they have long struggled with persecution and growing Buddhist resentment. As they do not have permission to leave the camps built for them, most are unemployed, have no source of income and have to rely on the World Food Program to survive.

The U.N. considers Rohingyas to be one of the most persecuted minorities in the world. Despite many families having lived in Myanmar for generations, government authorities still consider them to be illegal immigrants from neighboring Bangladesh. The unrest in Myanmar in 2012 cost many Rohingyas their lives. About 140,000 stateless Rohingyas were placed in internal displacement camps due to the increasing violent attacks on them. The nationalist 969 Movement, which led to the spread of violence against Rohingyas in the country, forced many to live in camps with poor conditions.

As Myanmar's Buddhist-Muslim religious and ethnic divide has escalated, many Rohingyas who sought refuge in neighboring Thailand and Bangladesh have been left stranded at sea by human smugglers, leading to one of the most deplorable refugee crises in Southeast Asia. Around 3,500 people, mainly Rohingya or economic migrants from Bangladesh, have reached land in Thailand, Malaysia and Indonesia, while thousands more are feared to be trapped on boats adrift at sea.
Last Update: Jun 02, 2015 10:18 pm
RELATED TOPICS