700 migrants reach Myanmar land, US says Rohingya should be citizens 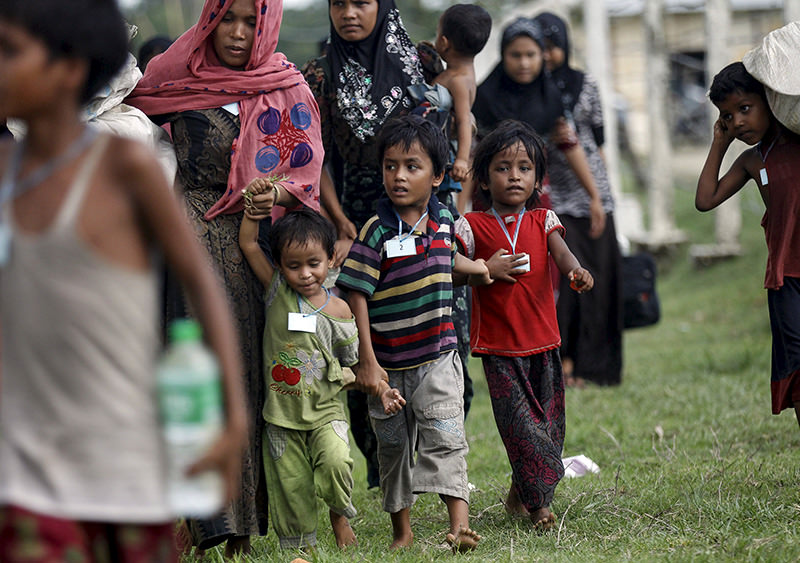 Migrants, who were found at sea on a boat, carry their belongings as they were moved to Taung Pyo sub-township after landing near Kanyin Chaung jetty outside Maungdaw township, northern Rakhine state, Myanmar June 3, 2015 (Reuters Photo)
by Daily Sabah with Reuters Jun 03, 2015 12:00 am
More than 700 migrants have been disembarked in Myanmar's western state of Rakhine on Wednesday after being kept for days at sea aboard a seized vessel. The United States called on Myanmar to help solve a migrant crisis by recognizing the rights of its Muslim Rohingya minority.

U.S. President Barack Obama has sought to make Myanmar's transition to democracy a legacy of his presidency, and Washington is stepping up pressure on the Southeast Asian nation to tackle what it sees as the root causes of an exodus of migrants across the Bay of Bengal that the region has struggled to cope with.

The 727 migrants were found drifting in the Andaman Sea on Friday in an overloaded fishing boat that was taking on water. Myanmar's navy brought the vessel to the coast of western Rakhine state, where they disembarked on Wednesday.

Scores of migrant men were sat on the ground at the landing spot near the town of Maungdaw, close to the border with Bangladesh, a Reuters witness said.

Others assembled inside a warehouse, and all were being watched over by dozens of police, the witness said. There were no aid personnel yet at the site, he added.

Myanmar does not recognise its 1.1 million-strong Rohingya minority as citizens, rendering them effectively stateless. Many have fled the apartheid-like conditions of the country's Rakhine state. Myanmar denies it discriminates against them.

"Rohingyas need to be treated as citizens of Burma," U.S. Assistant Secretary of State Anne Richard told reporters at a press briefing in Jakarta, using the country's former name.

"They need to have identity cards and passports that make clear they are as much citizens of Burma as anyone else."

Obama said on Monday that Myanmar needed to end discrimination against the Rohingya people if it wanted to succeed in its transition to a democracy.

Politicians in Myanmar were focused on a historic general election scheduled for November, Richard said, which was hindering political discussion of the status of the Rohingya, who are deeply resented by many of Rakhine's Buddhist majority.

Images of desperate people crammed aboard overloaded boats with little food or water has focused international attention on the region's latest migrant crisis.

The crisis blew up last month after the Thai crackdown made it too risky for people smugglers to land their human cargo. Smugglers abandoned boats full of migrants at sea.
Last Update: Jun 03, 2015 3:46 pm
RELATED TOPICS