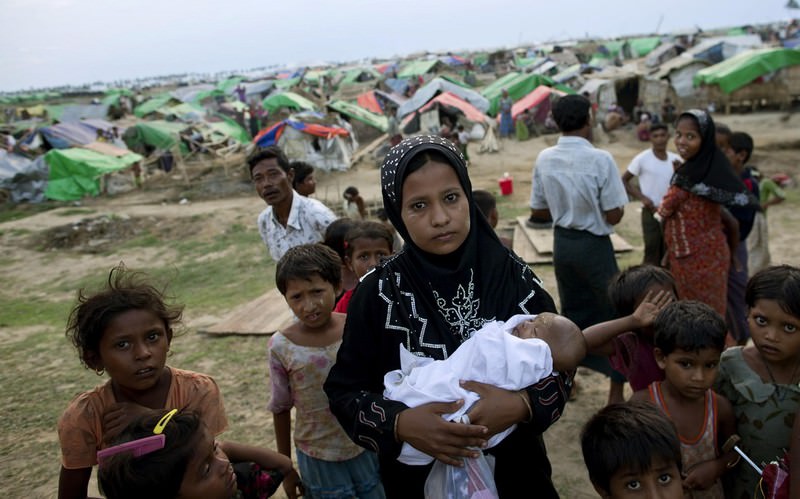 by Anadolu Agency Jun 09, 2015 12:00 am
Pakistan has announced $5 million in food assistance for Rohingya Muslims sheltered at camps in Indonesia, Malaysia and Thailand, according to a government statement Tuesday.

The statement said the aid would be delivered through the World Food Program. It added that Prime Minister Najib Razak would write to the United Nations' Secretary General and Security Council to express the country's concerns over a crisis that has seen tens of thousands of Rohingya flee Myanmar.

The measure was among recommendations by ministerial committee established over the weekend to suggest relief efforts for Rohingya, following protests across Pakistan in support of the minority -who the United Nations consider to be the world's most persecuted ethnic minority.

The committee, comprised of Sharif's closest advisers, met for the first time Sunday to evaluate what role Pakistan could have in providing relief.

Pakistan's senate passed a resolution Tuesday condemning the persecution of Rohingya and calling on the international community to address the issue.

It also said June 12 should be declared a day of solidarity with Muslims in Myanmar, and Pakistan should send a delegation to the Southeast Asian country to discuss the issue.

Interior Minister Chaudhry Nisar Ali Khan has criticized the international community for its "criminal silence" and lack of action to prevent the alleged persecution of Rohingya.

"The silence of such bodies raises serious questions about the utility and effectiveness of international forums that proclaim themselves as upholders, defenders and promoters of human rights and democratic values," Nisar said in a statement this weekend.

Myanmar does not recognize its Rohingya Muslims as Rohingya, preferring to use the term "Bengali" which suggests that they are from Bangladesh across its western border.

Many Rohingya have for years been fleeing Myanmar by sea to escape alleged persecution from both the authorities and extremist Buddhists. In the process, many have fallen prey to human traffickers.

Thousands of Rohingya and Bangladeshi migrants have been stranded at sea since Thailand launched an anti-trafficking crackdown May 1 after discovering the bodies of dozens of migrants near its border with Malaysia.

After initially turning back boatloads of migrants, Indonesia and Malaysia agreed to take Rohingya in for one year, ascertaining which are asylum seekers and which economic migrants, on the condition that the international community then resettle them.
Last Update: Jun 09, 2015 8:20 pm
RELATED TOPICS