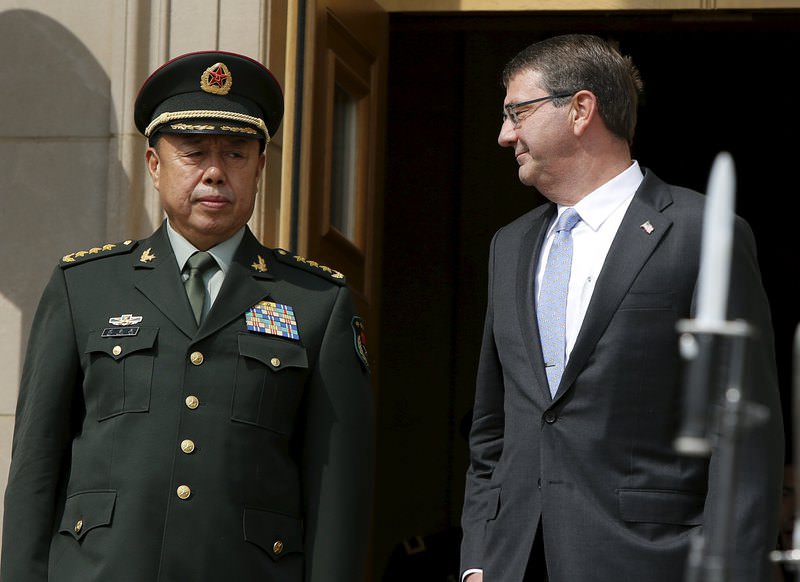 by Jun 12, 2015 12:00 am
U.S. Defense Secretary Ash Carter met a top Chinese general on Thursday and repeated a U.S. call for a halt to land reclamation in the South China Sea while stressing that the Pentagon remained committed to expanding military contacts with China.

In the meeting with General Fan Changlong, a deputy head of China's powerful Central Military Commission, Carter stressed his commitment to developing "a sustained and substantive U.S.-China military-to-military relationship," the Pentagon said.

It said this would be based on a shared desire to deepen cooperation in areas, including humanitarian assistance, disaster response, peacekeeping, counter-piracy, as well as "constructive management of differences".

In reiterating U.S. concerns about tensions in the South China Sea, Carter called on China and all rival claimants to halt land reclamation and militarization of disputed territory, and to pursue a peaceful resolution in accordance with international law, the Pentagon statement said.

Carter also reaffirmed his commitment to reach a consensus by September on a memorandum of understanding aimed at reducing the risk of accidents when the two countries' aircraft operate in close proximity, the statement said.

Fan's visit to the Pentagon was part of a week-long visit to the United States, which will include a meeting with U.S. National Security Adviser Susan Rice at the White House on Friday. Earlier this week, Fan visited the aircraft carrier USS Ronald Reagan and U.S. military bases.

Wu Xi, deputy chief of mission at the Chinese embassy in Washington, said on Wednesday that Fan's trip was aimed at preparing the way for a visit by Chinese President Xi Jinping in September.

Wu said differences over the South China Sea and issues such as cyber security should not be addressed by "microphone diplomacy" but in "a proper way" to ensure Xi's visit was successful.

China protested to the United States last month after a U.S. spy plane with a television crew aboard flew close to artificial islands China has been building in the South China Sea. China says it has the right to build such islands.

The need for an understanding on air operations was shown last year when the Pentagon accused a Chinese fighter pilot of conducting a "dangerous intercept" of a U.S. Navy patrol plane by flying a few yards (meters) from the U.S. jet and performing acrobatic maneuvers around it.