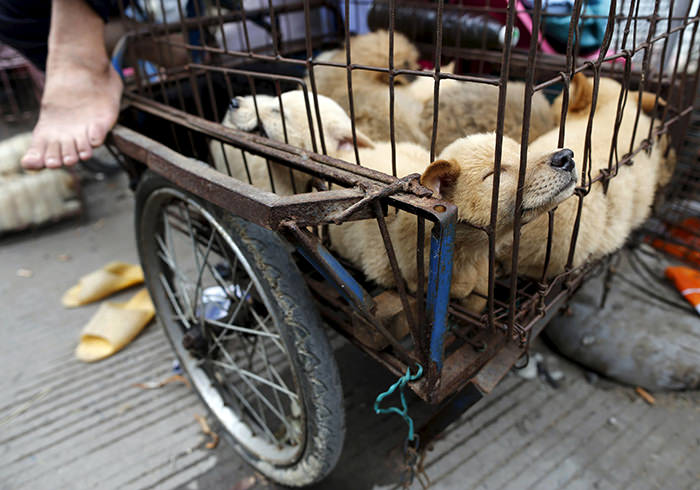 Dogs for sale are kept in a cage in Dashichang dog market on the day of local dog meat festival in Yulin, Guangxi Autonomous Region, June 22, 2015 (Reuters Photo)
by French Press Agency - AFP
Jun 22, 2015 12:00 am
Campaigners protesting China's annual dog meat festival, which sees thousands of canines butchered and eaten, were forcibly dispersed by unidentified men Monday as they attempted to rally outside a government office.

About 10 animal rights activists unfurled banners outside the Yulin government headquarters, before a group of 20 men came and chased them off.

The city holds an annual festival on the summer solstice devoted to the consumption of dog meat, in defiance of an increasing backlash from animal rights activists.

The campaigners held signs reading "Crack Down on Illegal Dog Meat Trade" and "Punish Illegal Dog Transport", but the banners were quickly torn out of their hands by the unidentified group of men.

The slogans are an attempt to appeal to local government officials to enforce existing laws on health and administrative grounds, as there are no rules banning the consumption of dog meat.

The majority of "meat dogs" in the country are stolen pets and strays, according to an investigation published this month by Hong Kong-based charity Animals Asia, though eating dog is unusual in most parts of China.

Meanwhile, in another part of Yulin, traders openly sold dogs off the back of scooters as hundreds gathered at a market. Many dogs were kept in tightly packed cages.

Activists, who say the festival is cruel, have in the past traveled to the city to hold demonstrations, sometimes buying dogs to save them from the cooking pots.