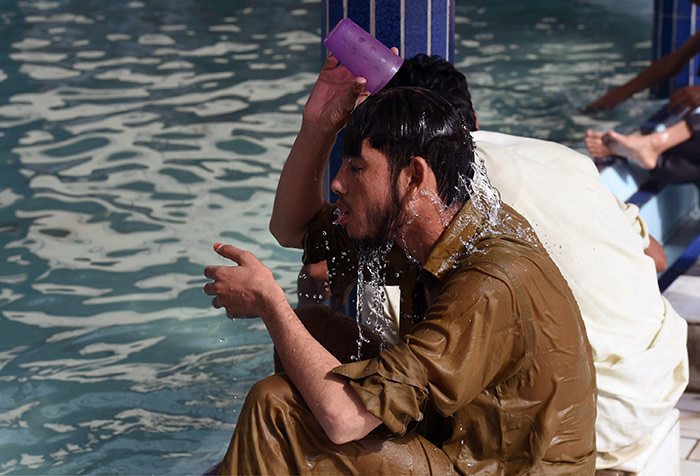 A Pakistani man cools down with water at a mosque during a heatwave in Karachi on June 22, 2015 (AFP Photo)
by Compiled from Wire Services Jun 23, 2015 12:00 am
Pakistan's financial capital of Karachi is wilting in a four-day heat wave that has killed more than 800 people, a health charity said on Wednesday, as the government declared a holiday in the city to encourage people to stay home and cool off.

The heat wave has coincided with severe electricity cuts and the holy month of Ramadan, when most Muslims do not eat or drink during daylight hours. Many of the deaths, among the elderly and poor in the southern city, were caused by dehydration.

Temperatures have touched 44 degrees Celsius (111 degrees Fahrenheit) in the steamy port city in recent days, up from a normal summer temperature of 37 C (99 F). But meteorological authorities say rain is due.

"We are anticipating a sea breeze will set in some time tonight. The temperature will come down as the monsoon rain enters the Sindh coast, bringing rain to the city," said Ghulam Rasool, director general of the Meteorological Department.

The death toll could rise because about 4,000 people were being treated at hospitals for heat stroke or exhaustion, said Ijaz Afzal, a director at the provincial health ministry.

Nearly all the deaths occurred due to heat stroke and exhaustion, said doctor Seemin Jamali at the city's Jinnah Hospital, where around 250 dead were taken.

Doctors from army and civilian rescue agencies have set up dozens of temporary medical camps to treat people with dehydration and heat stroke, the military said.

Around two dozen people died in other parts of Sindh, said Meraj Ahmed, a rescue worker at the Edhi Foundation, Pakistan's largest charity.

The heatwave caused nearly a dozen deaths in southern parts of the central province of Punjab, said doctor Naseer Ahmed of the Rescue 1122 Service.

Thundershowers and a spell of pre-monsoon rains were expected to start later in the evening on Tuesday, bringing some relief, Rasool said.

In the eastern city of Lahore, at least 2,000 children were being treated at hospitals with diarrhea, said doctor Shakoor Bangash.

Nearly 2,500 people died in April and May due to a heatwave in the states of Andhra Pradesh and Telagana in India, Pakistan's eastern neighbour.
Last Update: Jun 24, 2015 4:11 pm
RELATED TOPICS