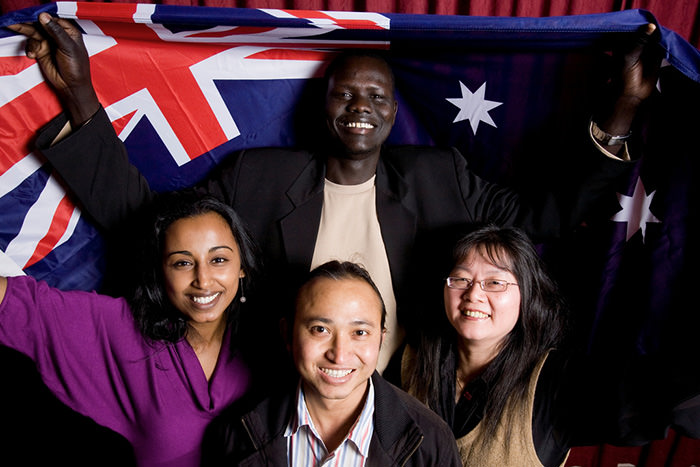 |Wikipedia Photo
by Anadolu Agency Jun 24, 2015 12:00 am
A controversial law that will see Australian dual nationals suspected of being involved in "terrorism" would be stripped of citizenship has been introduced to parliament by Peter Dutton, the immigration minister, at a House of Representatives session on Wednesday.

"It is now appropriate to modernize provisions concerning loss of citizenship to respond to current terrorist threats," ABC News reported him as saying. "The world has changed so our laws should change accordingly."

Since 2014, Australia has been concerned about its nationals joining or supporting groups fighting in the Middle East and the impact it could have on the country in the case of their return.

The government says the proposals would reinforce section 35 of the Citizenship Act, which stipulates the revocation of citizenship from nationals fighting for a country at war with Australia.

The legislation would apply to dual citizens who are "convicted of a specific terrorism-related offence" or suspected of engagement in "specified terrorist-related conduct".

A proposal in the original bill enabling the immigration minister to revoke the citizenship of a person "suspected" of terror acts - including alleged support for groups like ISIS - has been set aside following concerns over its constitutionality. A conviction would have not been necessary, with the decision subject to judicial review.

"We face a heightened and complex security environment - regrettably some of the most pressing threats to the security of the nation and the safety of the nation come to citizens engaged in terrorism," Dutton said Wednesday.

The parliament's security and intelligence committee will also assess the bill to see whether it can be applied retrospectively.

The development comes during a time when Australia is working to verify whether two of its nationals suspected of fighting with the self-proclaimed Islamic State in Iraq and al-Sham (ISIS) - Khaled Sharrouf and Mohamed Elomar - were killed in an air strike on the northern Iraqi city of Mosul.

Both had become notorious after photographs on social media showed them holding severed heads, while Sharrouf had released a photo last August of his 7-year-old son also lifting up a head.

On Tuesday night, Sharrouf's mother-in-law Karen Nettleton pleaded with Prime Minister Tony Abbott to allow her daughter and her five children -among whom the oldest, 14-year-old Zaynab, had reportedly married Elomar - to return to Australia.

Abbott said Wednesday that he felt for the children, but said they would "be dealt with in the same way that families of criminals are dealt with".

"These aren't the first evil murderers to have had families," he told the Seven Network.

In the statement issued Tuesday night, Nettleton said, "I accept that some will be critical of my daughter, who followed her heart and has paid an enormous price." Saying her daughter Tara had "made the mistake of a lifetime", she added: "Today she is a parent alone in a foreign and vicious land looking after a widowed 14-year-old and four other young children."

Dutton has said that rather than addressing the possibility of repatriation through the media, the family should contact the federal police.

Australia has already banned its citizens from traveling to Mosul and Syria's Raqqa province - unless they have a "legitimate purpose" for being there. Civil rights groups have expressed concerns that the measure places the burden of proof on an individual to show they entered the prohibited area for such purposes - which include humanitarian aid, journalism or family visits.
Last Update: Jun 24, 2015 4:06 pm
RELATED TOPICS